China's zero-Covid policy has seen Russians overtake the Chinese as the top foreign buyers of condos in Phuket, with the total in the first quarter exceeding the whole of 2021. 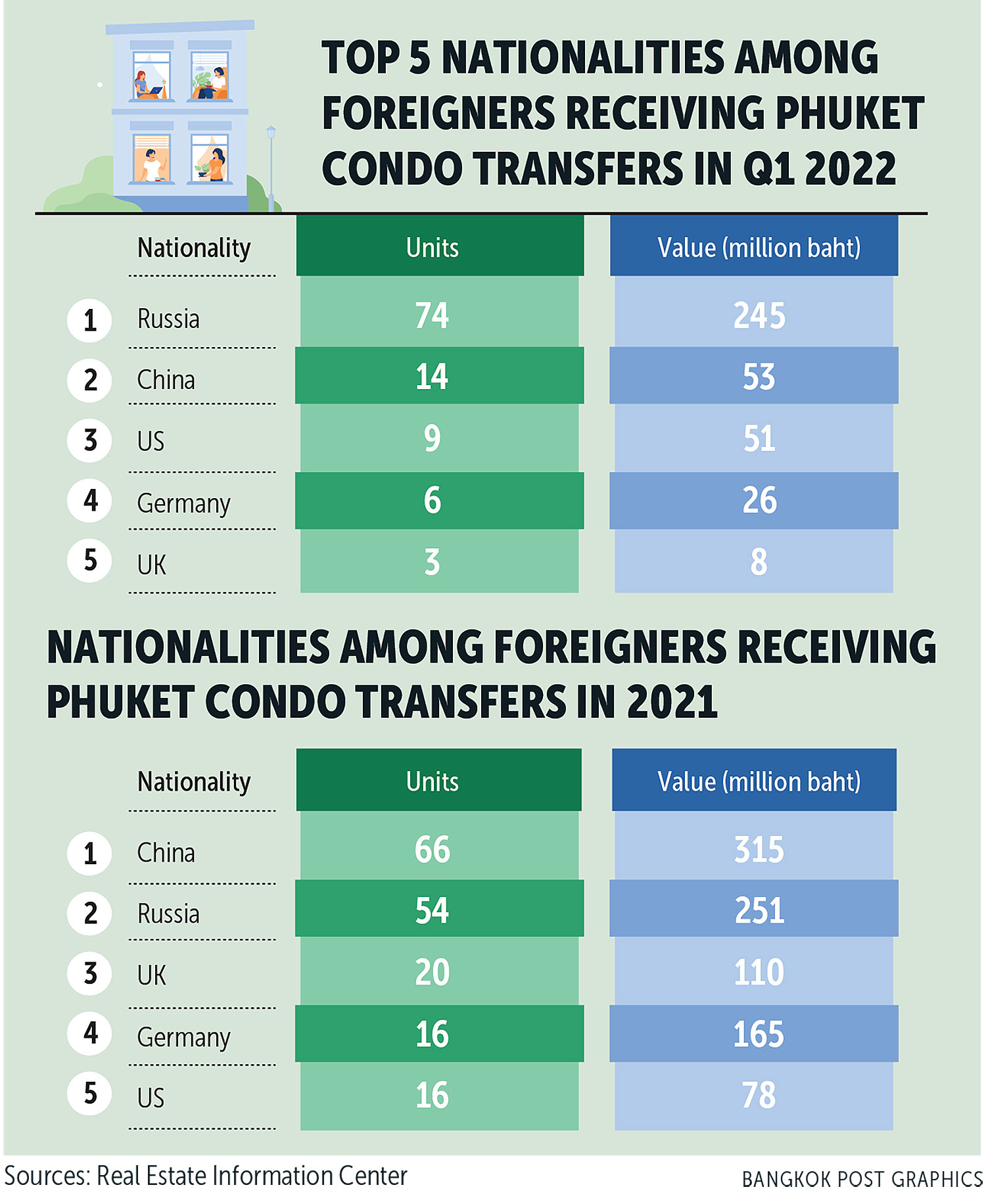 "Russian investors started to return in late 2021 and became the main purchasing power during this period," he said. "However, the overall condo market in Phuket may need some time to recover."

He said the biggest buyers in the Phuket condo market were previously the Chinese, but they almost entirely disappeared due to border controls in China and restrictions on international money transfers.

According to the Real Estate Information Center, Russians were the top nationality making condo transfers in Phuket in the first quarter of 2022, with 74 units worth 245 million baht.

This number outpaced both last year's Chinese purchases of 66 units, and the Russian acquisition of 54 units in 2021.

"The Russian market, however, slowed while political conflict escalated," said Mr Nattha. "If both Chinese and Russian buyers return, they will help give developers confidence because they have the potential to help the Phuket condo market recover faster."

He said the Phuket condo market was very popular amongst foreigners as their investment was for both personal holidays and renting them out.

However, Covid-19 affected the number of tourists in Phuket for more than two years.

The condo market in Phuket became very sluggish as the tourism slowdown severely impacted it, and also affected the local economy.

After the Phuket Sandbox was implemented in July 2021, tourists and foreign buyers started to return.

However, due to restrictions on some activities, Phuket's economy did not fully recover.

As a result, condo developers paused new launches in 2021 in order to dispose of their remaining units and wait for a further assessment of the situation.

"The revival of the condo market in Phuket still faces challenges from economic factors tied with tourism. However, the tourism situation started to improve from the previous Test & Go period," said Mr Nattha.

The Test & Go scheme resulted in foreign tourists being able to enter the country more easily, stimulating the economy of Phuket and allowing it to take another step forward. This had a positive impact on its real estate sector.

Nearly 90% of the units sold last year were to Russian buyers, with a few Europeans and some Chinese buyers, who come to Phuket annually. The remaining 10% were sold to Thais who purchased condos as their holiday homes.

The average asking price for a condo in Phuket depended on its views. Units with sea views commanded an average selling price of 196,015 baht per square metre, up 1.6%.

"If the situation returns to normal, the average asking price will increase by 10-15%, particularly for a sea-view unit which has a greater sales rate than others," Mr Nattha said.

Units with a partial sea view saw price declines, particularly those which had been on the market for a long time, with discounts of up to 40%.