La Habana Hua Hin, completed in 2020, is one of Sansiri's condo projects totaling more than 20 projects with over 5,000 units worth more than 30 billion baht since 1988. The developer has the largest market share of condo in Hua Hin area.

Condo demand in Hua Hin picked up in the first half, driven by Thai, Chinese and Russian buyers, while a large amount of supply remained unsold in Cha-am, according to property consultant Colliers Thailand.

Phattarachai Taweewong, research and communication director at Colliers Thailand, said the condo market in Hua Hin was robust in the first half as a new project featuring 252 units launched in the second quarter recorded a sales rate of more than 90%.

"Thais looking for a resort home and Bangkok-based investors buying to rent were active buyers," he said. "Chinese and Russian buyers are also gradually returning. This momentum will continue in the second half." 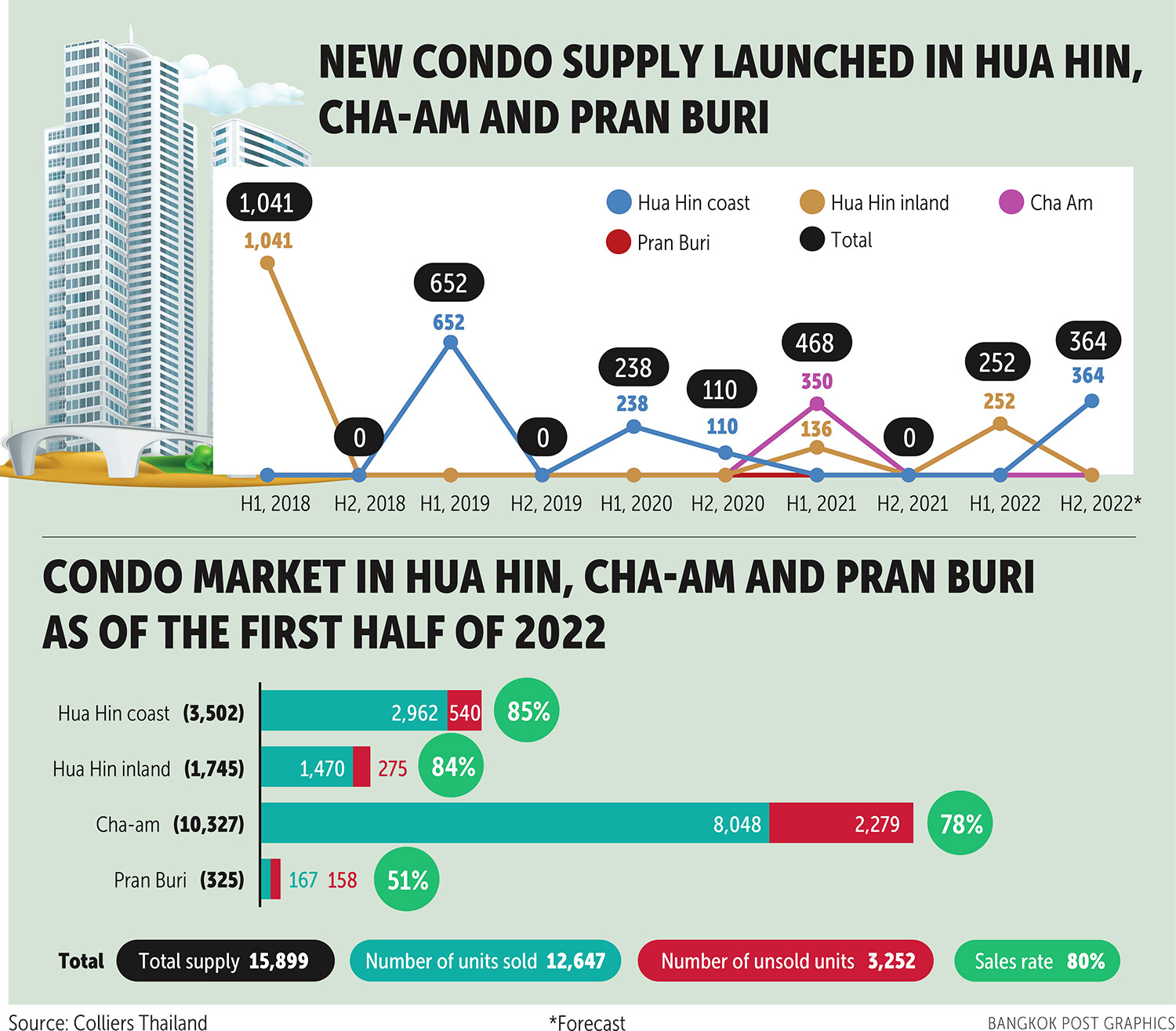 Due largely to a scarcity of land, the increase in land prices in Hua Hin's coastal area in the first half of 2022 rose to 10%, up from the usual level, which is 7% per year.

At present, the offering price for a beachfront plot in Hua Hin was 150 million baht per rai, said Mr Phattarachai.

The growth of land prices in Hua Hin's coastal area had driven the selling prices of condos in the location with an increase of 80% during the past 10 years or 8% per year on average.

"Some beachfront seaview condo units have a selling price of up to 370,000 baht per sq m. These units attracted high-end purchasing power as buyers saw there was a limited supply and prices are on the rise," he added.

Mr Phattarachai said the Hua Hin inland area had drawn interest from developers over the past few years due to lower land costs.

Land prices in this location were currently offered at 30-50 million baht per rai.

As a result, condo prices in the Hua Hin inland area were much lower than those of the coastal area at around 60,000 baht per sq m which attracted many buyers.

In the second half, there will be a new condo project from Supalai Plc which will launch its first project in Hua Hin on a seven-rai plot in the inland area with a 28-storey tower and a total of 525 units, he said.

In Cha-am, land prices in the first half of 2022 rose 6% from the same period last year because of more available land plots.

Offering prices of beachfront land ranged from 50-70 million baht per rai, just 50% lower than the beachfront in Hua Hin.

During the past decade, there have been a total of 71 new condo projects with a combined 29,152 units worth 123.7 billion baht launched in Hua Hin, Cha-am and the Pran Buri area.

The peak years were in 2011-12 when there were a total of 7,000-8,000 condo units launched per year, mainly attributed to the great flood in 2011 which pivoted condo demand to tourism destinations.

However, sales and development of 10 condo projects with 6,219 units worth 10 billion baht was frozen. More than 70% of these projects were in Cha-am.

Cha-am also had a large number of condo supply remaining unsold at 2,279 units.

"New supply launch in Cha-am should slow down as there was a large number of unsold units remaining and most of them are completed," said Mr Phattarachai.