Gigi still making the difference for Italy at 38
Sports

Gigi still making the difference for Italy at 38

MILAN - His trademark stubble shows the odd fleck of grey, but the advancing years are having no effect on the reflexes, and ambition, of evergreen Italy and Juventus captain Gianluigi Buffon. 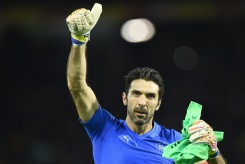 Italy's goalkeeper Gianluigi Buffon reacts at the end of a friendly football match between Belgium and Italy in Brussels on November 13, 2015

At 38 years old, Buffon’s status as one of the greatest goalkeepers ever means he is a key figure for a redemption-seeking Italy side at Euro 2016.

Luckily for Italy, Buffon has just celebrated his "best" title win yet with Juventus, who fought their way back from a disastrous start to equal their 1935 feat of winning five consecutive Serie A crowns.

"He's had a great season," said Dino Zoff, the legendary former Italy and Juventus goalkeeper to whom Buffon has been ritually compared.

Buffon conceded only 20 goals in Juventus' 38-game campaign and while the impressive statistics are a testament to Juve's astute defensive game, the buck stops with Buffon.

"It’s a privilege to have a captain like Gigi. He assumes his responsibilities, and makes the difference for us on and off the field," said Juventus president Andrea Agnelli in the wake of Buffon signing a new two-year deal last month.

A commanding force in the dressing room, Buffon helped drag Juventus from their early season wobbles and back into contention for the title, pulling off some crucial stops when it mattered.

A last-gasp penalty save against Croatian striker Nikola Kalinic that secured a crucial 2-1 away win at Fiorentina in April effectively secured Juve the title. Roma stunned Napoli to win 1-0 the following day.

"The title this year is the best (of the last five) yet," Buffon said in Florence, where the players celebrated as though they had already won the title by throwing coach Massimiliano Allegri in the air.

For Buffon, there was a cherry on the cake.

Buffon has a worldwide army of fans who admire his shot-stopping, affable demeanour and the statistics back up the hype.

Now a record 157-cap holder, Buffon, remarkably, remains the world's most expensive goalkeeper 15 years after his 2001 move from Parma to Juventus for a reported 53 million euros.

Yet Juve got their money's worth, and so have Italy.

On the way to winning seven league titles, Buffon was key to Italy's World Cup triumph in 2006 when he conceded just twice in seven games -- a record held with Spain's Iker Casillas and France's Fabien Barthez.

Earning the prestigious (Lev) Yashin award after being voted goalkeeper of the 2006 World Cup, Buffon is still the only goalkeeper to win the UEFA Club Player of the Year award, alongside Ronaldo, Zinedine Zidane, Cristiano Ronaldo and Lionel Messi.

A Champions League exit to Bayern Munich three months ago came barely a year after the disappointment of last year's defeat in the final to Barcelona. That means Buffon is now the reluctant owner of two runner-up medals, from 2003 and 2015.

He said it is a quest he hopes to end before giving up. "To win the Champions League we need to manage our nerves better, reinforce our character and be more focused, that's what I learned from our exit against Bayern."

Koeman seeks extra time as Barca get set for Benfica

France's Dupont suceeds Kolbe as Top 14 player of the year