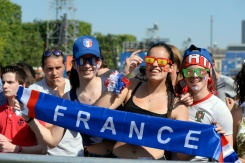 Supporters hold a France banner as they gather in the fan zone behind the Eiffel Tower, on the Champs de Mars during the opening of the Paris fan zone one day before the start of the Euro 2016 football championship, on June 9, 2016

With the world's eyes on France, tourism officials fear the country's current difficulties could tarnish its reputation for years to come.

As hundreds of thousands of fans began arriving for the tournament, a train strike entered its ninth day and bags of household rubbish piled up in the streets of Paris as union blockades of incineration plants halted collections.

All this on top of massive floods and an ongoing row over labour law reforms that has seen police and protesters clash in the streets.

"It is just catastrophic. The international media are showing Paris in flames and France in permanent social conflict. And the foreigners who see the bins outside the Cafe de Flore will think the whole country's like this!" Jean-Pierre Mas, head of Entreprises du Voyage, the national trade body for travel agents, told AFP.

He said the "summer season is already ruined because we're bang in the period when people book their summer holidays and they won't hesitate to go somewhere else".

Frederic Valletoux, the head of the tourism commission for the Paris region, echoed his pessimism, saying they had "put back any hope of seeing numbers bounce back before September".

At Les Deux Magots, one of the city's most illustrious Left Bank watering holes, operations manager Serge Bonnin admitted they were "not seeing the same number of people in June as normal in other years".

Environment Minister Segolene Royal has appealed to unions to end their disruption, warning that they are endangering the image of France, while President Francois Hollande said the government was ready to take "all necessary measures" to deal with the strikes.

Near Les Deux Magots, Brazilian tourists Jose Fernando Ogura and Fernanda Andreazza struck a more upbeat note, saying "the situation in Paris isn't as catastrophic as all that -- it's definitely worse in Brazil!"

"We don't feel in any danger, but on the other hand the city is very dirty, especially compared to London," they said.

Denis Juilliere, a guide for tour groups in Paris, said simply keeping tours going has been a challenge -- locating petrol for the buses amid shortages and finding things to do when the floods put a stop to Seine river cruises.

"Overall tourists are quite patient and understanding, but there is inevitably some disappointment, because when you're on holiday you don't want to be confronted with a load of problems," he said.

The MEDEF employers' federation laments "the caricatured image" of a country always on strike.

The chief of Business France, the agency in charge of promoting France abroad, Muriel Penicaud, meanwhile, said that "for investors who have not yet invested in France, it's more of a brake, a psychological brake. We need to step up our efforts to inform, explain and put things in perspective."

Mas of the travel agents' association acknowledged that a successful tournament would improve the country's image.

"But imagine what it would look like if some of the teams couldn't get around because of a strike," he said.

While last year France was still the world's top tourist destination, with nearly 85 million foreign visitors, Marc Lhermitte of consulting firm EY warned "the long term damage could be significant because we are in competition with other countries".

Moreover, Paris is battling to host the 2024 Olympics and images of transport chaos and rubbish in the streets will not help its case.

"But France is resilient," Lhermitte said, and if football fans see bins in the street or a cancelled train, "they'll say to themselves, 'That's France!'"