MONTREAL - Ferrari are not expecting miracles in improved performance from their upgraded power units this weekend, Finn Kimi Raikkonen said on Thursday. 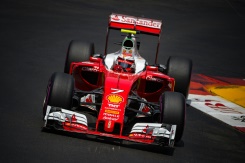 Ferrari's driver Kimi Raikkonen drives during the qualifying session at the Monaco street circuit, on May 28, 2016 in Monaco

The Italian team, without a win this year, are to introduce revisions for both the turbo and the compressor for their cars at the Canadian Grand Prix.

"This is a step forward, but how much only time will tell," Raikkonen told reporters. "It is a new part and we never put new parts on the car if we didn't think they improve things.

"But what kind of step? I don't expect miracles. It is the right direction – it is something we have been waiting to have.

"It is like any other new parts we bring. It is not suddenly something magic. It is normal working progress for us as a team and it is going in the right direction all the time."

He added that the team were working to improve in all areas.

"We are working on weaknesses and you always look for better results and wins. So far it has been a tricky start to the year but we are more or less there."

His Ferrari team-mate four-time champion Sebastian Vettel of Germany said he had no objections if the team chose to recruit Daniel Ricciardo in future as a successor to Raikkonen.

The Australian, who has been linked strongly with a move to Ferrari from Red Bull, was his team-mate in 2014 and remains the only driver to have beaten him over a season.

"I think he's a strong guy and obviously he had a good season in 14. Last year and this year it's a bit difficult always to judge because you don't know what's going on internally, but, from what I know, he's a good guy.

"But, then again, it's not my decision. It's not my job to sign people. Our main priority now is to close the gap…"