WELLINGTON - All Blacks assistant coach Ian Foster on Tuesday expressed confidence winger Julian Savea would return to his blockbusting best after a lacklustre performance against Wales. 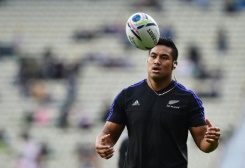 All Blacks' wing Julian Savea has looked a far cry from the player who terrorised defences during New Zealand's 2015 World Cup triumph, when he scored a record-equalling eight tries in a single tournament

Savea scored a try in the All Blacks' 39-21 first Test win on Saturday but was subbed off early in the second half after failing to contain the threat from Wales wing George North.

It added to a run of inconsistent form that saw Savea dropped for a match by his Super Rugby team the Wellington Hurricanes this season amid concerns over his fitness.

The giant wing has looked a far cry from the player who terrorised defences during New Zealand's World Cup triumph last year, when he scored a record-equalling eight tries in a single tournament.

Foster said Savea was improving and working his way back into form.

"He hasn't come into this campaign on great form and it didn't really go his way, to a certain degree, last week," he told reporters.

"But he's just taking it day by day and getting better and better, so it's just all part of getting him back to the shape that we really need him to be in."

In an ominous sign for Wales, Savea bounced back from being dropped by the Hurricanes with a three-try performance against the Jaguares.

If selected for the second Test in Wellington this weekend, he will also avoid his nemesis North, who has been ruled out of the rest of the series with a hamstring injury.

War Elephants off to fine start

'It feels great': Phachara gets off the mark