Iceland hit back at 'ungracious' Ronaldo after Euro 2016 draw
Sports

Iceland hit back at 'ungracious' Ronaldo after Euro 2016 draw

SAINT-ETIENNE - Euro 2016 minnows Iceland hit back at Portugal star Cristiano Ronaldo, labelling him "not a gracious human being" after he criticised the Atlantic islanders' defensive tactics in a 1-1 draw in Saint-Etienne. 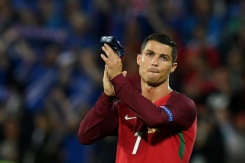 Portugal forward Cristiano Ronaldo acknowledges the crowd at the end of the Euro 2016 Group F match against Iceland in Saint-Etienne, France, on June 14, 2016.

Ronaldo accused Iceland of having a "small mentality" on Tuesday as they prevented the Real Madrid ace from becoming the first man to score in four European championship finals on their debut at a major international tournament.

"He's a fantastic footballer, but he's not a gracious human being and the thing is we almost nicked the win, so him saying we weren't going for the win contradicts that," said midfielder Kari Arnason, who was on the receiving end of a four-goal Ronaldo haul in their last meeting when Real smashed his Malmo side 8-0 in December.

And Arnason even claimed the humble attitude of Ronaldo's perennial rival for the crown of the world's best player, Lionel Messi, makes him more loveable than Ronaldo.

"Obviously we're not going to create as many chances as a fantastic team like Portugal, but his comments are the reason why Messi is always going to be one step ahead of him," he said.

Ronaldo had 10 shots on goal, but stormed off the pitch at full-time in frustration, denied by Iceland's dogged defence and a great display from goalkeeper Hannes Halldorsson.

"He had a header in the final minutes of the game and a chance in the first-half, but otherwise I thought we had him under control," added Arnason.

"We didn't set up to man-mark him or anything, we just had to know where he was at any given moment and that he will shoot from outside the box and that everything has to be blocked."

"He thought he could have goals handed to him on a plate," Hreidarsson, who made 89 international appearances, told the BBC.

"If he would have worked as hard as every Icelandic player, he wouldn't have had to say anything because I'm sure he would have got his rewards.

"He didn't fancy it on the day and he just got beaten up."

Ronaldo had two chances to create his moment of history deep into stoppage time with two free-kicks in dangerous territory.

However, on his record-equalling 127th appearance for Portugal, he smashed both into the wall as the full-time whistle was met with delight by the Icelandic players and loyal band of supporters from the tiny island of just 330,000 people.

"With a player of that quality you're a bit scared to be honest and when he gets even closer with the second free kick you’re even more scared," said Arnason.

"But we decided that wall was going to block the near corner and the goalkeeper the far one. He had to rely on that wall and the wall did its job."

Sinovac vaccination in Lampang halted for a few hours after nine recipients developed numbness and one also showed limb weakness. All later recovered and the jabbing continued.

Veni, vidi, bici: Is Rome ready for a cycling 'revolution'?