Ronaldo under fire, Hungary pinching themselves at Euro 2016
Sports

Ronaldo under fire, Hungary pinching themselves at Euro 2016

PARIS - Real Madrid superstar Cristiano Ronaldo came under fire Wednesday for describing Iceland as having a "small mentality" after the minnows grabbed a 1-1 draw against his Portugal side. 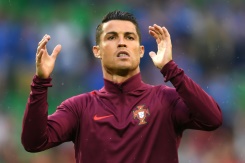 Bidding to become the first player to score in four European Championship finals, Ronaldo was frustrated in Saint Etienne on Tuesday by a country with a population of just 333,000.

Afterwards, he let his frustration show.

"Iceland didn't try nothing, they just defend, defend, defend. They had two chances and scored a goal, it was a lucky night for them," Ronaldo said.

"It's why I think they will do nothing here. In my opinion, it’s a small mentality."

Icelandic midfielder Kari Arnason accused Ronaldo of lacking grace -- and compared him unfavourably with his rival for the world's best player, Lionel Messi.

"He's a fantastic footballer, but he's not a gracious human being and the thing is we almost nicked the win, so him saying we weren't going for the win contradicts that," Arnason said.

"His comments are the reason why Messi is always going to be one step ahead of him," he said.

"Rude, petulant and surly, it did little to gainsay his reputation for oafish narcissism," it said.

"In fact, accusing his opponents of having a 'small mentality' was rather self-revealing: if anyone was being narrow in their outlook it was him."

Former Iceland international Hermann Hreidarsson said Ronaldo was a "sore loser" who had been "beaten up" by Iceland's hard-working team.

"He thought he could have goals handed to him on a plate," Hreidarsson, who made 89 international appearances, told the BBC.

"If he would have worked as hard as every Icelandic player, he wouldn't have had to say anything because I'm sure he would have got his rewards.

"He didn't fancy it on the day and he just got beaten up."

Ronaldo, 31, equalled Luis Figo's record number of 127 international appearances and his team got off to a good start when Nani opened the scoring -- the 600th goal in European Championship history.

But Ronaldo's night was spoiled when he spurned a handful of chances and midfielder Birkir Bjarnason volleyed in a 51st-minute equaliser.

The surprise leaders of Portugal's Group F are Hungary, who shocked 10-man Austria 2-0 in their first win for 30 years at a major international tournament.

Second-half goals from Adam Szalai and Zoltan Stieber saw Hungary stun the Austrians in Bordeaux to mark a glorious return to the big time having not played in an international finals since the 1986 World Cup.

Aleksandar Dragovic weakened Austria when he was sent off for two yellow cards.

And Stieber really got the Hungarian party going when he raced from inside the Austria half to beat Robert Almer with a deft chip three minutes from time.

"The players played out of their skins," said Hungary coach Bernd Storck.

Austria coach Marcel Koller laid out the unenvious task ahead for his side: "We'll have to try and win against Portugal."

Hungary next take on Iceland in Marseille on Saturday.

Russia, under threat of being thrown out of the tournament if their fans cause more violence, returned to action on Wednesday against Slovakia.

French police were on high alert as 65,000 Russian, Slovakian, English and Welsh fans poured into Lille, creating a potentually explosive mix after the mass brawls between Russian and English fans in Marseille on Saturday.

Later, host nation France will be expected to brush aside Albania and more or less guarantee their passage to the last 16.

Switzerland could also move towards the later stages if they record a second win by beating Romania at the Parc des Princes in Paris.

Police have again suspended use of checkpoints to test motorists for driving under the influence of alcohol, citing the need to concentrate on stopping the spread of Covid-19.

At least 53 passengers on a flight from New Delhi to Hong Kong have tested positive for coronavirus, authorities said Tuesday, as the Chinese financial hub introduced an emergency ban on arrivals from India over a new wave of cases.

'Madrid will not be kicked out of Champions League': ESL chief Perez