HARARE - Zimbabwe rose from the ashes of an embarrassing one-day series whitewash at the hands of India to shock the tourists by two runs in a thrilling Twenty20 international at Harare Sports Club on Saturday. 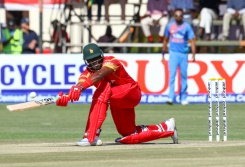 Zimbabwe's batsman Hamilton Masakadza, pictured on June 18, 2016, provided a positive start at the top of the order with 25 from 15 balls

In a game that went right down to the final delivery, Elton Chigumbura’s unbeaten 54 ultimately made the difference as Zimbabwe took a one-nil lead in the three-match series.

Despite fielding five debutants in the format, India went into the fixture as strong favourites because of their experience in the Indian Premier League, only to come away chastened.

“It’s a levelling experience, by which I mean that you need to give a lot of respect to cricket irrespective of the opposition,” captain Mahendra Singh Dhoni said.

“You can’t play with your reputation -- what’s important is how well you execute and I felt we were way off today in both the bowling department and in the batting.

“At the same time credit goes to Zimbabwe because they made the most of that opportunity -- they batted well and bowled the right line.”

Zimbabwe’s batting had been dismal in the ODIs, when they failed to score more than 168, but on Saturday they appeared to rediscover their joy for the game as they posted 170 for six.

Hamilton Masakadza provided a positive start at the top of the order with 25 from 15 balls, while Malcolm Waller took the game to India through the middle of the innings with his 30.

A familiar collapse looked to be on the cards when Waller failed to pick Yuzvendra Chahal’s googly and Sikandar Raza Butt was run out for 20, but Chigumbura found form to spark fireworks at the end, hitting seven sixes in his 26-ball knock.

The all-rounder’s innings represented a dramatic turnaround after he had registered back-to-back golden ducks in the final two ODIs, which Zimbabwe lost heavily.

“After what happened in the one-day series, as a team it was time to redeem ourselves,” said Chigumbura.

“We knew that if we played as a team and all contributed, the chances were that we would have a chance of winning the game.”

Although they lost KL Rahul to the first ball, India looked on track to complete the chase for the majority of their reply as Manish Pandey led the way with 48.

However the tourists were guilty of losing wickets at key moments to let Zimbabwe back into the game, which went into the final over with Dhoni on strike and India needing eight to win.

Seamer Neville Madziva allowed only singles to leave Dhoni with four to get off the last ball, then kept his nerve to finish with a yorker as India finished on 168 for six.

“It’s my job (to finish the game), but at the same time we kept losing wickets so I felt the batsmen will have to take the responsibility because quite a few of them were set,” said Dhoni.

“It’s important when you’re chasing a total to take it to the end, and that was something that was lacking in this game.”

The second game in the three-match series takes place at the same venue on Monday.