Alvarez to take on unbeaten 'Beefy' Smith in boxing bout 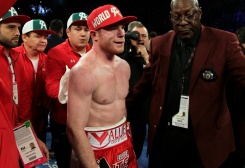 No venue was named for the bout in which Smith, 23-0 with one draw, will be making the third defense of his World Boxing Organization junior middleweight crown, however it is expected to be in the United States.

"I'm very pleased to announce my next fight against Liam Smith, a tremendous fighter with real knockout power," said Alvarez, who is 47-1-1 with 33 knockouts and one of the most feared punchers around.

"I will work with all the enthusiasm as I always do to get the upper hand."

The fight will take place on the Mexican Independence Day weekend and comes after Alvarez knocked out Britain's Amir Khan on Cinco De Mayo, the other major Mexican holiday when fight promoters like to book his bouts.

Smith has won his past eight fights by knockout but expects this to be his first fight outside of Britain.

"I am delighted to get the opportunity to defend my world title against the biggest name in world boxing and to headline in the US, which is a dream I've had since I started in the sport," Smith said.

Alvarez has won five fights in a row since suffering his lone loss to now-retired Floyd Mayweather by decision in 2013. Last month, Alvarez vacated the World Boxing Council crown he defended against Khan, a title the WBC awarded to pound-for-pound king Gennady Golovkin.

Smith stopped compatriot "Jimmy" Kilrain Kelly in the seventh round last December and knocked out Montenegrin Predrag Radosevic in the second round earlier this month.

"This is a fantastic chance for Liam to showcase his talent in such a high-profile fight," promoter Frank Warren said.

"He believes, as do I, that he has the tools to beat Alvarez and stake his own claim to be the world's best."