Reawakened Ronaldo up against a Croatia with teeth
Sports

Reawakened Ronaldo up against a Croatia with teeth

LENS - Cristiano Ronaldo awoke from his Euro 2016 slumber in time to rescue Portugal from an early exit, but faces a greater challenge against a classy Croatia side that Portugal coach Fernando Santos called "sharks" in a wide open draw. 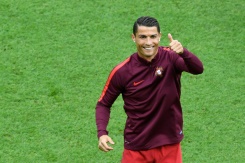 Portugal's Cristiano Ronaldo made history as the first player to score in four European Championships with a double in a thrilling 3-3 draw with Hungary on June 22, 2016.

Ronaldo made history as the first player to score in four European Championships with a double in a thrilling 3-3 draw with Hungary. The result saw Portugal just squeeze through behind Iceland and Hungary in third-place in Group F.

The Real Madrid star has more records in his sights as he is just one goal behind French legend Michel Platini's mark of nine in European Championship finals.

However, Ronaldo refused to accept Portugal were underdogs against a Croatia side that shocked two-time defending champions Spain to top Group D.

"Croatia are a tough team, with good players. Not every team manages to beat Spain.

"We respect them, but we know our strengths and we'll look them in the eye when we face them."

Croatia are likely to be even stronger for Saturday's clash in Lens (1900GMT) than against Spain with the return of Ronaldo's Real Madrid teammate Luka Modric from injury.

Juventus frontman Mario Mandzukic is also likely to shake off a knock to retake his place after Croatia coach Ante Cacic made five changes for the historic win over Spain.

"I cannot say if they are fit to play 90 minutes, but everything looks good," added Cacic.

Santos laughed off suggestions his side had been fortunate to come up against Croatia rather than another meeting with two-time defending champions Spain, who beat Portugal on route to winning the 2010 World Cup and Euro 2012.

"Croatia are one of the sharks we had been trying to avoid," he said.

"They placed first in a group with Spain, which tells you all you need to know about them."

However, Santos has placed his faith in Ronaldo to again answer his country's call and shrugged off accusations Portugal are too dependant on their all-time top scorer.

For Croatia a bright start to a tournament in France has rekindled memories of their fairytale run to the World Cup semi-finals in 1998 before losing out to the hosts 2-1.

Ivan Perisic was the hero against Spain, drilling home the winner three minutes from time.

However, Croatia cannot get carried away despite finding themselves in the weaker half of the draw avoiding Germany, France, Italy, Spain or England until the final.

"We made a really great job in the group stages, but this is just the beginning. If we lose the next match this doesn't mean anything," Perisic said.

"We have to stay at the same level and fight as we did in the first three matches if we want to recreate memories of 1998."

Croatia should at least be fresher than Ronaldo and his teammates, who had 24 hours less rest since their final group game and spent four hours on the journey north from their training camp just outside Paris to Lens due to traffic on Friday.

"If we were talking about the beginning of the season 72 hours is enough for the players to recover, but this is the end of the season," added Santos.

"There is no use crying over spilt milk. It is up to the coach to ascertain how well the players are doing physically and pick the right team."