OMAHA (UNITED STATES) - Nathan Adrian, eyeing a 100m freestyle title repeat at the Rio de Janeiro Games, eased into the semi-finals at the US Olympic swimming trials on Wednesday in 48.43sec. 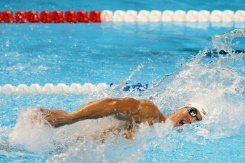 Nathan Adrian competes in a preliminary heat of the men's 100m freestyle during the US Olympic swimming trials on June 29, 2016 in Omaha, Nebraska

Adrian, whose best time of 2016 of 48.00 puts him fifth in the world rankings, is trying to buck the trend that saw three 2012 gold medallists fail to qualify in events they won in London in the first three days of the trials.

"You prepare to swim three -- two good ones and hopefully one great one," Adrian said. "That got one of the good ones out of the way. Hopefully I'll have another good one tonight."

But Adrian has eager newcomers on his heels. Ryan Held, 21, broke 49 seconds for the first time in posting the second-fastest qualifying time of the morning of 48.46sec.

Collegiate star Caeleb Dressel won his heat in a personal best of 48.69.

Anthony Ervin, a 50m free gold medalist back in 2000, notched the fourth-fastest time.

Ryan Lochte posted the sixth-fastest time of 49.13, but coach David Marsh told reporters that the 11-time Olympic medalist would scratch the semi-finals.

Lochte booked a Rio relay berth in the 200m free on Tuesday, but has not yet punched his ticket in an individual event after missing out in the 400m medley.

Michael Phelps, aiming to punch his ticket to Rio in the 200m butterfly final later Wednesday, opted out of the 100m free altogether.

The 18-time Olympic gold medalist doesn't have to swim the 100m free at trials in order to be considered for the 4x100m free relay in Rio.

In other finals on Wednesday, Katie Ledecky will seek to qualify for Rio in a second individual event, the 200m freestyle, and 400m medley trials winner Maya DiRado will try to add the 200m medley to her Rio slate.

World championships silver medalist Cammile Adams survived a scare when she was disqualified from the top qualifying spot in the 200m butterfly heats for an illegal turn, only to be reinstated based on video review.

"A lot of panic," Adams said of hearing the disqualification announcement. "With it being overturned I'm obviously very thankful."

Marsh, who also coaches Adams at Swim MAC Carolina, said the deck official thought Adams pushed off a wall on her back.

The video, however, showed otherwise.

"She was fully on her side moving toward her stomach, so thankfully we followed the process of what FINA does with the underwater cameras," Marsh said. "This was a case where having more technology is the right thing to do."

Marsh said he was shocked to hear the disqualification announced at the end of the heat because Adams "doesn't do things wrong."

"She's precise in what she does in life and in the pool," he said.

Adams clocked 2:08.29, with Hali Flickinger winning her heat in 2:09.20 for the second-fastest time of the morning.

Will Licon won his heat in the second-fastest time of the morning, 2:09.43.