OMAHA (UNITED STATES) - Michael Phelps will bring down the curtain on his stellar Olympic career in Rio, heading a US swimming team packed with newcomers eager to stamp themselves the future of the sport. 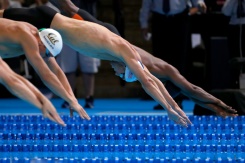 Michael Phelps (C) dives in to compete in the final heat for the men's 100m butterfly event during the 2016 US Olympic Team Swimming Trials, at CenturyLink Center in Omaha, Nebraska, on July 2

Phelps and his gang of ageing warriors that includes Ryan Lochte, Nathan Adrian and Anthony Ervin have one thing in common with the 30 first timers: They all must swim faster than they did at the eight-day US trials if they want to dominate in the competition pool as they have in Games past.

US men's head coach Bob Bowman, who has guided Phelps throughout a career that spans four prior Olympics that yielded 22 medals, 18 of them gold, believes they can.

"One of the things that we have always done well, better than anyone else, is improve from the trials to the Games," Bowman said. "And I'm confident we're going to do that again.

"And quite frankly we're going to have to do that if we want to have the kind of Olympics that we are expected to have and want to have."

While the trials that concluded on Sunday produced a string of tight races and the compelling drama that comes of knowing only the top two in each event will book Olympic berths, the times were not especially fast.

No world records were broken and just one American record was set by Josh Prenot in the 200m breaststroke.

Katie Ledecky, the surprise 800m gold medallist in London, underscored her freestyle dominance with victories in the 200m, 400m and 800m while Maya DiRado won both women's medleys and the 200m backstroke to book three individual swims in her first Olympic Games.

Phelps was the only other swimmer to win three events at trials -- the 100m and 200m butterfly and 200m individual medley.

"I thought his times this week were mediocre," Bowman admitted, but added he was "crystal clear" on what needed to be done in the weeks leading up to Rio to rectify that.

Based on trials times US men lead the world this year in only two events -- Prenot's 2min 07.17sec in the 200m breast and David Plummer's 52.12 in the semi-finals of the 100m back which he failed to replicate in a runner-up finish in the final.

US women top the world rankings in four events -- three of them courtesy of Ledecky and the fourth newcomer Lilly King's 1:05.20 in the 100m breaststroke.

"On the women's side, I think there are some real strengths and I would say some significant challenges, really, event-by-event," said David Marsh, head coach of a women's team that features a veteran presence in defending 100m butterfly gold medalist Dana Vollmer and in Missy Franklin.

Franklin was far from the force she was in 2012, when her seven-event London slate produced four gold medals, but she qualified to defend her 200m backstroke gold and to swim the 200m free with runner-up finishes.

Both Bowman and Marsh were at a loss to explain why the times in 10 of 26 events were slower at these trials than in 2012.

But Bowman said it might have something to do with the growing spectacle of an event USA Swimming officials like to call their Super Bowl.

"People know what the event is like and how big it is," Bowman said of the meet that draws up to 14,000 spectators per session and features a light-show opening ceremony every night and fireworks at the medal ceremonies.

The hoopla only adds to the pressure of the do-or-die meeting, even for proven performers like Phelps.

"If you think Michael wasn't nervous for those races, he absolutely was," Bowman said. "Everybody is."

But Bowman said the quick turnaround before swimming competition starts in Rio on August 6 is to the Americans' advantage.

"Once they're at a peak level, like they are now, it's much easier to make small adjustments to help them improve or to try to correct some things that maybe didn't go well here," Bowman said.