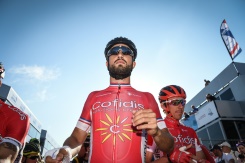 French cyclist Nacer Bouhanni prepares to take the start of the French cycling championships on June 26, 2015 in Vesoul, eastern France

The fight started when Bouhanni complained about noise and resulted in the 25-year-old Cofidis sprinter needing surgery.

The incident took place two weeks ago ahead of the French national championships and his team Cofidis said at the time that the rider had been "assaulted by drunken people".

French judicial authorities have confirmed a complaint has been filed, although Bouhanni himself did not wish to comment in a telephone interview with AFP.

In early June, when winning the opening stage of the Criterium du Dauphine, Bouhanni dedicated his success to deceased boxing legend Muhammad Ali.

"It's important for me to dedicate this victory to Muhammad Ali," said Bouhanni at the time, who took up boxing at six years of age, although his hero back then was another American heavyweight great, Mike Tyson.