FRIBOURG (SWITZERLAND) - Nairo Quintana says the only way to beat Chris Froome is to isolate him from his powerful Sky team-mates. 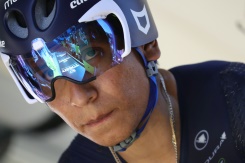 Ahead of four consecutive days in the Alps, Quintana spoke about how he would be aiming to turn around a near-three minute deficit to the reigning champion in a bid to claim Tour glory for the first time.

"What we need to attack him is for his team to be spent," said the 26-year-old Colombian.

"As we've seen, his team is really strong, they've not suffered much damage from any attacks.

"Some of his team-mates who are helping him could be leaders in other teams.

"The main idea is to try to get him on his own."

So far, Froome has been surrounded on every stage by an armada of team-mates who've been setting a high tempo and chasing down the few attacks they've faced.

Froome himself has described his team as the "strongest Sky have ever brought to the Tour".

Quintana has often been accused of riding too conservatively and not risking all or nothing until he's run out of time.

Both in 2013 and 2015 when finishing second overall to Froome, he gave away time over the first two weeks before fighting back in the final part of the race.

This time around he is 2min 59sec behind but he said there is no point attacking Froome if you're not sure to make a difference, as happened to him on the 12th stage finish on Mont Ventoux.

In the stage, Quintana attacked twice unsuccessfully on the lower slopes before losing time when Froome put in a burst of acceleration in the final kilometres.

"There were times when I wanted to attack, I was the only one to attack on Ventoux, and we know what happened there," added the Movistar leader.

"In Culoz, on Sunday, I could have attacked but there was a dangerous descent and then a flat run to the finish.

"We're not going to attack if we're not sure we can improve our situation."

Quintana is currently fourth overall but Movistar sports director Eusebio Unzue believes he could form an alliance with Italian Fabio Aru of Astana to put Sky in difficulty.

Aru is sitting 10th overall at 5:16 but is likely to be looking to attack himself in order to move up the standings to achieve his aim -- probably a top three finish.

"Astana have not been very aggressive but Aru is a guy who comes into his own in the third week and the fact of the matter is I think we could find common objectives," said Unzue.