MOSCOW - Timeline of Russian doping and corruption scandals after the International Olympic Committee said Tuesday it will study "legal options" before deciding whether to ban Russia from the Rio Games over its state-run doping programme. 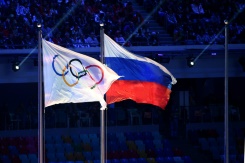 An Olympic Games flag and a Russian flag wave during the closing ceremony of the winter Olympics in Sotchi on February 23, 2014

ARD airs second documentary with new accusations aimed at Russian and Kenyan athletes based on a leaked IAAF database with details of 12,000 blood tests from 5,000 competitors which revealed "extraordinary" levels of doping. Sebastian Coe is elected to succeed Diack as IAAF president later that same month.

WADA's report into the scandal calls on Russia's track and field team to be banned from international competition, including from the 2016 Rio Olympics, until "state-sponsored" doping is eradicated.

WADA's second report into doping and corruption is published. It says IAAF leaders must have known about the wide scope of doping.

The former head of Russia's anti-doping laboratory, Grigory Rodchenkov, exiled in the United States, describes an organised doping campaign including at least 15 medallists from the 2014 Sochi Winter Olympics, with the close involvement of the sports ministry and the FSB security service.

Another ARD programme claims that Russian authorities have been covering up for coaches disgraced by the doping programme, directly pinpointing Mutko for his alleged involvement in the cover-up.

The IAAF Council unanimously votes to extend the ban on the Russian athletics federation, but offers an Olympic lifeline to athletes training outside the Russian system to compete in Rio as neutrals.

The IAAF clears only US-based long jumper Darya Klishina to compete in Rio, after 136 Russian athletes applied for exemption from the blanket ban. Klishina later tells AFP that she has been branded a traitor back home.

The investigation finds the FSB secret service helped "the state-dictated failsafe system" carried out by the sports ministry and covering 30 sports.

WADA consequently calls for Russia to be banned from the Rio Olympics in August and urges global sports governing bodies to bar Russia until "culture change" is achieved.

IOC president Thomas Bach describes the revelations as "a shocking and unprecedented attack" on sport.

Russia's Sports Minister Vitaly Mutko is barred from attending the Rio Games and the IOC orders a disciplinary commission to look into his ministry's role detailed in the McLaren report.

The IOC puts back a decision on whether to bar Russia from Rio -- barely two weeks away -- and will also await a Court of Arbitration for Sports decision on an appeal by 68 Russian athletes against the IAAF blanket ban from competition. That was expected on Thursday.

BAKU: Azerbaijan accused Armenia of killing 21 people and wounding dozens in a missile strike near Nagorno-Karabakh on Wednesday, the deadliest reported attack on civilians in a month of fighting over the disputed region.

Once celebrated as democracy champions, a tight elite of elderly former political prisoners at the helm of Myanmar's ruling party now stand accused of oppression, discrimination and censorship.