BERN (SWITZERLAND) - Spending four days in the Alps might sound relaxing yet it will be anything but for Chris Froome and his Tour de France rivals. 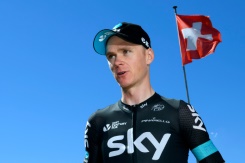 Wednesday sees the start of the final push from Bern in Switzerland all the way to Paris and Tour glory.

But there will be a lot of suffering, starting with Wednesday's 184.5km 17th stage to Finhaut-Emosson.

The finish line arrives at the end of a 30km-stretch including 23km of climbing and just 7km of respite.

It will surely test Froome and his rivals to their limits, coming as it does at the end of a mountainous stage that penetrates deep into the Alps.

Froome has a healthy 1min 47sec lead over his nearest rival, Dutchman Bauke Mollema, but all the pre-Alpine talk was about attacking the yellow jersey and trying to prevent Froome landing a third Tour title in four years.

Having secured top 10 finishes in the previous three years, Mollema, 29, is growing into his role as title-challenger.

"A two-minute gap to Froome is big. I can't remember a time that I took two minutes from him in a TT (time-trial) or a mountain stage, but I am in the form of my life," said Mollema.

The major difficulty will be the fact that the next four days include four tough Alpine stages, with Thursday's 17km time-trial followed by a pair of explosive stages, the first with an uphill finish and the second no less mountainous for its descent to the line.

"We've never yet done four such tough stages in a row at the end," said Italian Fabio Aru, currently sitting 10th but determined to fight for a top-three podium finish.

"So it will be interesting to see how everyone reacts to such selective challenges."

Froome said from the start of the Tour that he felt this would be the crucial period in the whole race.

The Team Sky leader adjusted his training accordingly and believes he is entering the final straight stronger than he was in previous years.

"Things have been fantastic for us up until now, so let's see what this next block offers," said the Kenyan-born Briton.

"If other teams attack, we're ready for it. We're not gong to be complacent, we're up for that challenge."

But for Nairo Quintana, the 26-year-old Colombian who finished runner-up to Froome in 2013 and last year, the race is now entering his favoured terrain.

He may have disappointed so far in the Tour, but Quintana took time out of Froome in the Alps previously -- one minute in 2013 and two minutes last year.

However, he has three minutes to make up this time.

"You don't always climb as well as you'd like, but good days are coming in terrain where I have made my name," said the Movistar team leader.

"I'm really hoping to do well there. We're still in good shape, no worse than last year I believe, and with a lot of hope."

Thailand, the world’s top producer of coconut milk, said it will enable retailers and consumers to trace coconuts back to their source to show whether monkeys have been used for harvesting.