Asian 400m record holder Masrahi out of Rio for doping 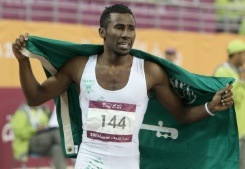 Youssef Ahmed Masrahi of Saudi Arabia celebrates after winning the gold medal for teh men's 400m during the 2011 Arab Games in Doha on December 16, 2011

The 28-year-old tested positive after a training session in June.

"So as to maintain the principle of transparency, the anti-doping committee of the athletics federation has decided to exclude Youssef Masrahi," said the Saudi authorities in a statement.

Masrahi, who has denied taking a banned substance, will face a hearing on August 7.