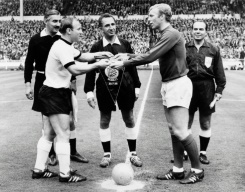 Hurst's second goal in the 101st minute of extra time -- which put England 3-2 ahead after the match had finished 2-2 over 90 minutes -- is arguably the most controversial goal in international football history.

England went on to claim a 4-2 win over West Germany with Hurst becoming the only player to score a hat-trick in a World Cup final.

But whether or not the ball bounced behind the line from Hurst's shot for England's third goal has been debated for half a century with Saturday marking the 50th anniversary of the 1966 final.

Swiss referee Gottfried Dienst awarded the goal after consulting with his linesman, Azerbaijan's Tofiq Bahramov, of the then USSR.

Some modern studies, using film analysis and computer simulation, suggest the ball never crossed the line, something Seeler has been insisting on for half a century.

"I was standing at the back of the box and saw exactly that the ball didn't cross the line," said the 79-year-old Seeler.

Hurst's shot beat West Germany goalkeeper Hans Tilkowski, the ball hit the underside of the crossbar, bounced on the line before being headed away by defender Wolfgang Weber.

But Dienst's decision has always baffled the Germans and their skipper Seeler.

"We were all in a state of commotion, none of us knew what was going on," said Seeler.

"No one (in the West Germany team) could understand why the goal was given."

While the 1966 final remains England's only World Cup triumph, the Germans' victory at the 2014 Brazil finals was their fourth world title and Seeler says it is time to put the 1966 controversy to bed.

"I believe all the players have now well digested the events," he said.

"Even if it was a defining moment, sport is sometimes like that. You have to absorb it and put it away."

Up until his death in 1998, Dienst admitted he had no idea whether the ball ever fully crossed the line and, in his autobiography "1966 And All That", even Geoff Hurst has said the Germans were probably right.

And Seeler joked about the incident whenever he met members of England's 1966 side.

"When Geoff or Bobby (Moore) or Jackie (Charlton) were here, we'd have a laugh together about it," said Seeler.

"They knew all right that the ball wasn't in. They saw it."

And Seeler said he is pleased goal-line technology in the modern game means there will be no such repeat of the events 50 years ago.

"So it's necessary to under take certain measures to prevent such decisions.

"Of course, there are mistakes from time to time, but that's just part of football."

The match and THAT goal are even the subject of a special exhibition at the German Football Museum in Dortmund under the title "50 years Wembley -- the myths in snapshots" which runs until January 15.

Epicenter favored in Preakness with Derby-winner Rich Strike out