Germany's night owl ready to rule in the pool
Sports

Germany's night owl ready to rule in the pool

BERLIN - According to his coach, Marco Koch is more of a "night owl than an early bird" and Germany's world 200m breaststroke champion endured many late nights to prepare for the Olympics. 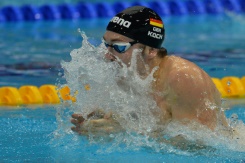 German world 200m breaststroke champion Marco Koch, struggled to get enough sleep as he adjusted his training times to deal with the Rio finals which will be held at 10.00pm local time

Like most elite swimmers getting ready for Rio, the German, born in Darmstadt near Frankfurt, struggled to get enough sleep in the build-up to the Games.

The Rio finals will be held roughly four hours later than normal, starting at 10.00pm local time, with the heats in the early afternoon and Koch had to adjust his training times.

"The disadvantage in Rio is not only the late times, but also that the sun rose so early in Germany," Koch said before flying to Brazil.

"The training went well, but I had problems sleeping.

"I'd always try to stay awake until 2:00am and sleep in until 11:00am, but it was very light early in the mornings (in Germany) and everyone else in my house was up."

He sought advice from a sleep laboratory in Berlin and used a special lamp in an attempt to reset his body clock.

At a time when most 26-year-olds normally go out on the town, Koch was regularly hitting the pool.

"One doesn't swim in a disco and whether or not I dance slower or faster doesn't matter," he said drily.

And forget any notion of him fine-tuning his Rio preparations in a state-of-the-art facility.

Koch trained for the Olympics in his local public open-air pool in Darmstadt in all weather conditions.

"The water was usually warm enough," he said, having shared the pool with pensioners and school children.

He put in late-night training sessions under floodlights to replicate Rio's conditions.

For all his success, the German is certainly not swimming in gold.

His Darmstadt club launched the campaign "Marco Koch for Gold" to raise the funds so the local world champion could fly business class to Brazil.

Koch said Germany's pre-Olympic training camp in Florianopolis was enough to get him ready for Rio and he tried to keep travel to a minimum in his preparations.

"The back and forth is tiring for the body, which doesn't do me any favours," he explained.

He has already twice swum faster this year than the 2min 9.12sec he swam to win the world title in Kazan last August, leaving Olympic champion Daniel Gyurta of Hungary to finish fifth.

Koch said he feels "a little bit stronger than last year" and believes he will have to swim faster than his winning time in Kazan to strike gold in Rio.

"Whoever wins is going to break the world record. In any case, the question is how far under it one will have to go," he said.

"Everything went wrong. I arrived too early and was there too long, so everyday I lost the tension you need," he explained.

Koch has taken on board the lessons from his defeat to Britain's Ross Murdoch, who has not qualified for Rio, in finishing second at London's European championships in May - his first defeat for three years.

His coach, Alexander Kreisel, said it was a timely wake up call for the night owl.

"Maybe it was the right moment to get a shot across the bow, added Kreisel.