Sopita Tanasan poses with her medal after wining the women's 48kg category of the Rio 2016 Olympic Games Weightlifting events at the Riocentro in Rio de Janeiro on Sunday. (Reuters photo)

Sopita, 21, won easily, helped by the withdrawal last week of the strong favourite from China, Hou Zhihui, who failed to recover from an injured knee. Hou has been replaced in China's team by Meng Suping, who will compete in the heaviest weight category, +75kg.

She promptly dedicated the medal to His Majesty the King.

"I dedicate the medal to our king. That is the Thai way," Sopita told reporters after she became the fourth women's weightlifter from Thailand to win an Olympic gold medal.

Another of Sopita's strongest rivals, Vietnam's Thi Huyen Vuong, failed to register a total after three failures in the snatch. 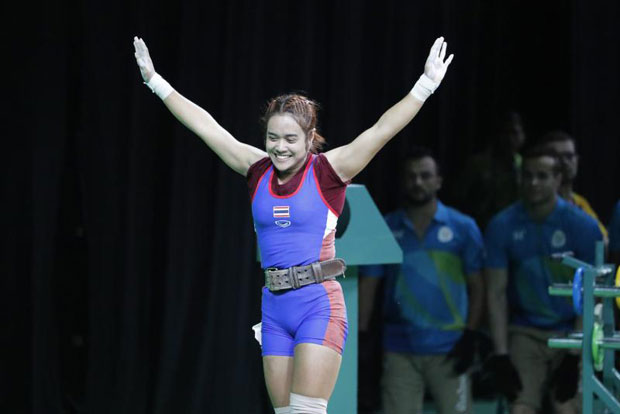 Sopita Tanasan reacts in the women's 48kg category of the Rio 2016 Olympic Games Weightlifting events at the Riocentro in Rio de Janeiro on Sunday. (EPA photo)

Margarita Yelisseyeva of Kazakhstan, who finished fifth, had plenty of support in the crowd at the Riocentro arena but not behind the scenes within the sport.

The International Weightlifting Federation voted in June to ban Kazakhstan and Belarus from the Games, along with Russia, because of their positive doping cases in re-tested samples from 2008 and 2012.

The ban was subject to the International Olympic Committee completing the legal processing of those tests before the entry deadline, and that did not happen. Both nations have teams of eight lifters in Rio, while Russia was excluded on evidence from the McLaren Report into state-sponsored doping for "bringing the sport into disrepute".

Sopita's gold means the country's women weightlifters have matched its men's efforts in boxing, the only two sports in which Thailand has won Olympic titles.