HANOI - Vietnamese rejoiced Sunday after their country won its first ever Olympic gold medal, a victory made all the more sweeter by the fact that regional rival China was beaten along the way. 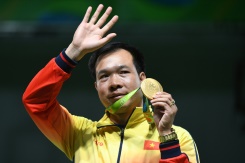 Vietnamese state media reported that Hoang Xuan Vinh would receive $100,000 from the state on his return -- a handsome sum in a country where the average annual income is around $2,100.

Hoang Xuan Vinh, a 41-year-old a serving army colonel who first learned to shoot with AK47 rifles, made history in Rio overnight when a near-perfect final shot in the men's 10-metre air pistol clinched him gold.

Vietnamese state media reported that Vinh would receive $100,000 from the state on his return -- a handsome sum in a country where the average annual income is around $2,100.

Vinh's victory shunted Brazil's Felipe Almeida Wu and China's Pang Wei into second and third respectively, something that was seized on by jubilant Vietnamese.

"So proud! But the greatest happiness was that we won over China," Nguyen Cao Ky Duyen, a Vietnamese music show host based in the US but popular in her homeland, wrote on Facebook.

"You are the pride of the nation and the people," added reader Truong Tran Hoang Du, on the Tuoi Tre newspaper's website.

Vietnam has shared an intense rivalry with its giant northern neighbour for centuries -- an animosity that has been stoked in recent years by competing claims in the South China Sea.

Beijing lays claim to virtually all of the strategic waters, putting it at odds with regional neighbours the Philippines, Vietnam, Malaysia, Brunei and Taiwan, which also have partial claims.

At least three Chinese nationals were killed in 2014 when rioting broke out in Vietnam after Beijing sent an oil rig into contested waters.

Last month information screens major airports in Hanoi and Ho Chi Minh were compromised by hackers who displayed anti-Vietnamese and Philippines slogans with regards to the South China Sea.

The attack came hours after a Chinese visitor to Vietnam complained that his passport was defaced with profanities by officials at Ho Chi Minh city airport.

Vietnam's state media said Hoang Xuan Vinh learned how to shoot in the communist country's military which he joined in 1991, initially practising on AK47 rifles.

"This victory came from the courageous spirit and the utmost determination of the athlete, his coaches and from key investment ahead of the 2016 Olympics," Minister of Sports Nguyen Ngoc Thien said.

Burnley and Sheffield United are heading in right direction