RIO DE JANEIRO - Rio de Janeiro's mayor vowed Monday to fight a court ban on crucial funding for next month's Paralympics, promising the games would get the cash they need. 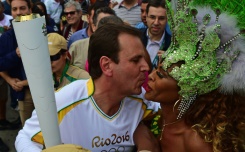 Olympics officials have warned that some countries need the money to fly their athletes in for the Paralympics, which run from September 7 to 18.

On Friday a federal judge forbade the authorities to transfer public funds to the Rio 2016 organizing committee, alleging a lack of financial transparency.

Mayor Eduardo Paes insisted on Monday the city would fund the Paralympics, promising up to $47 million to bail them out if needed.

"It would be a shame for Brazil and for Paralympics sports and people with disabilities if we were not able to carry out the event," Paes told a news conference.

He spoke after meeting with the president of the International Paralympic Committee, Philip Craven, and its chief executive Xavier Gonzalez.

Rio state authorities declared a "state of public calamity" in June in order to release emergency funds to finance the current Olympic Games.

Paes insisted at the time that the Games would not suffer from financial problems. He reiterated on Monday that the city's own finances were sound.

"Three weeks ago we verified that the committee does not have the resources to settle some of its accounts," he said on Monday.

"If necessary we will make an agreement to guarantee those funds."

For the Paralympics, "we are going to be very clear about where this money will be used," he said.

The Paralympic Games official budget is equivalent to about $2.3 billion.

The Rio 2016 committee has also said it will appeal.

"The most urgent issue that we need to resolve is the travel grant, because a lot of Paralympic NOCs (National Olympic Committees) need money to fly their athletes in," Rio 2016 spokesman Mario Andrada told a news conference in Rio on Monday.

"So the first priority, even before the appeal we are working on, is to determine how much money is needed for the travel grant and how soon can we offer this" to the countries, he said.

He said the Paralympics had run into unexpected financial trouble.

"What has affected the Paralympic Games was obviously low ticket sales and lack of sponsorship," Andrada said.

"With the help of the government we can take some extra measures that we wouldn't have been able to if we had to use our own money and our own sponsors."

Rio city hall had repeatedly vowed in the build-up to the Olympics that the Rio 2016 committee would receive no public funds.

The pledge came after an outcry from Brazilians furious over the billions being spent on the Games in the middle of an economic crisis.