And Panipak Wongpattanakit, a former world champion, finished the Olympics day when she outclassed Itzel Manjarrez of Mexico 15-3 to win inside the distance for a bronze.

Kim So-hui of South Korea, a double world champion, narrowly beat Panipak in the semi-finals and then prevailed over European champion Tijana Bogdanovic of Serbia 7-6 to win the women's under-49kg gold medal. 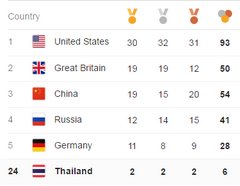 Thailand finished the day with two medals as Panipak Wongpattanakit, a former world champion, outclassed Itzel Manjarrez of Mexico 15-3 to win inside the distance for the other bronze.

Thailand has two gold medals, two silver and two bronze for its best-ever Olympics performance. The country is 24th overall, an unprecedented place for Thailand in the standings.

The medal hunt is not over for the Thais. Ariya Jutanugarn is a strong contender for gold in women's golf, and leads the event after the first of four rounds.