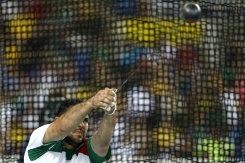 Tajikistan's Dilshod Nazarov heaved a best of 78.68 metres to take his country's first ever Olympic gold

Poland's Wojciech Nowicki claimed bronze with a best of 77.73m.