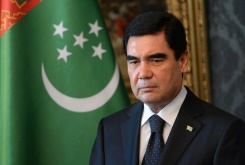 Oil-rich Turkmenistan, with a population of five million, has never won a single Olympic medal, unlike its four neighbours in ex-Soviet Central Asia

"It's disappointing that even with all the facilities provided, you could not justify the trust of the nation," Berdymukhamedov told the sports committee chief Kaakbay Seiidov in an angry encounter shown on state television.

Oil-rich Turkmenistan, with a population of five million, has never won a single Olympic medal, unlike its four neighbours in ex-Soviet Central Asia.

At Rio, none of its nine athletes got past the qualification rounds.

The president told the sports chief, whose position is the equivalent of minister, that he had failed to do all he could "to increase the sporting authority of the fatherland."

The president also warned Seiidov to "make good on these shortcomings in the near future or face the sack," state television reported.

In 2012, Berdymukhamedov, who is a keen horseman, fired a previous sports committee head after a similarly poor performance by the national team at the London Olympics.

The only Turkmenistan-born athlete to claim a medal at this year's Games -- silver-winning weightlifter Daniyar Ismayilov -- did so representing Turkey, where he now lives permanently.

Berdymukhamedov, 59, has spent billions in building world-class sports facilities for the country to host the Asian Indoor and Martial Arts Games in September 2017, while British running legend Sebastian Coe's company has given advice on planning.

The Turkmen leader oversees a "month of health and happiness" every spring in which state officials and ordinary citizens are forced to take part in mass group exercises in public.

He took power in the tightly-controlled country after erratic predecessor Sapurmurat Niyazov died of a reported heart attack in 2006.

This year, Turkmenistan's neighbours Kazakhstan and Uzbekistan both enjoyed their best-ever medal hauls at Summer Games, taking 17 and 13 medals respectively.

A weightlifter from Kyrgyzstan was the first athlete excluded for doping, stripping the country of its only medal.

Australian Open to allow 'Where is Peng Shuai?' shirts after backlash