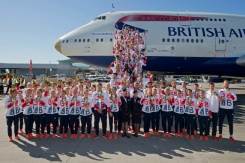 Great Britain's most successful Olympic Games in more than a century saw it finish with 67 medals, 27 of them gold

Great Britain's most successful Olympic Games in more than a century saw it finish with 67 medals, 27 of them gold, with only the United States ahead in the overall standings in Rio.

Some 320 athletes and support staff travelled back from Brazil in the British Airways Boeing 747 with "victoRIOus" emblazoned on the side.

Some of the medallists' families -- who have themselves given up hours of their time to support their relatives in their sporting ambitions -- were present to watch them land at London's Heathrow Airport and were then ushered into a private lounge.

Also on hand to greet the team was former sports minister Hugh Robertson, who was involved in the delivery of the successful 2012 London Games.

Britain's performance in Rio was the best by any country that had hosted the immediate preceding Olympics and Robertson, now a vice-president of the British Olympic Association (BOA) said the knock-on effect from London had played a part.

"One of the objectives was to leave a legacy for UK athletes for generations to come," he told AFP.

"Rio has surpassed all our expectations," added Robertson, who flew back from Brazil last Friday.

Kenny matched British cycling great Chris Hoy's tally of six golds with three wins in Rio, while Trott won two of her own to take her total to four.

Kenny, who returned earlier with Trott, told ITV's Good Morning Britain on Tuesday: "It is now sinking in. As we go out for dinner, people are coming up and saying 'Well done' and buying us drinks. I don't think we have bought a single drink since we have come back."

Several British competitors defended titles won in London, notably Mo Farah who again took gold in both the 5,000 metres and 10,000 metres and so became the first man since Finland's Lasse Viren in 1976 to complete Olympic long-distance running's 'double double'.

Farah was not alone in being a repeat champion, with boxing's Nicola Adams and taekwondo's Jade Jones also repeating their victories of four years ago.

Double gold medal-winning gymnast Max Whitlock and Adams were first off the plane, posing and waving for photographers, before the rest of the team followed to further cheers and applause from airport staff.

Several athletes posted tweets during the flight back and, after landing, Alastair Brownlee tweeted a selfie at the top of the plane stairs with the caption: "So #goodtobBAck. What a welcome."

France's Olympic team also landed in Paris on Tuesday after winning 42 medals in Rio, including 10 golds, a postwar record for the overall medal count.