NAIROBI - Kenya's runners impressed at the Rio Olympics, but to the country's shame its officials were equally distinguished when it came to corruption. 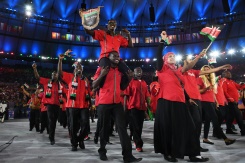 Six gold medals -- including in both men's and women's marathons -- six silvers and one bronze put Kenya in 15th place overall and made it the top African nation by far, yet a shameful shadow hangs over what was the best Kenyan Olympics performance ever.

Leading the controversy was the dismissal of track team manager Michael Rotich, recalled from Rio after an undercover investigation accused him of seeking a $13,000 (11,500 euros) bung to warn runners of "surprise" drugs tests.

Soon afterwards another coach, John Azrah, was also recalled after apparently attempting to pass himself off as one of his runners and then giving a urine sample. However, some have defended Azrah, 61, saying he only took the runner's ID so he could get a free breakfast at the Olympic Village.

- Trouble from the start -

Kenya's Olympics was in trouble before it even began. The World Anti-Doping Agency (WADA) only cleared the country's athletes at the last minute after parliamentarians botched the passage of a new law designed to convince world authorities that Kenya is serious about tackling the widespread doping that has seen at least 40 athletes banned since 2012.

Controversy also kicked off Kenya's Olympics when athletes appeared at the opening ceremony in mismatched gear, despite kit sponsor Nike providing ample outfits. Deputy president William Ruto, who was in Rio, called for criminal and parliamentary enquiries after Nike complained that much of the apparel had gone missing.

Meanwhile, Kenyan media -- and social media -- have been ablaze with stories of unknown hangers-on and freebie-seekers living large as part of the supposedly official delegation.

But while the freeloaders appeared to have no trouble reaching Rio, athletes were less fortunate. Someone forgot to book a plane ticket for javelin world champion Julius Yego -- who went on to win Olympics silver -- while 200m sprinter Carvin Nkanata's accreditation was submitted late meaning he almost missed his race.

Nor did the embarrassment end with the Olympics' closing: there has been no official homecoming with many of the athletes opting to sneak into the country to prevent officials basking in the glory of their performances.

"We don't want people to hog publicity from our arrival when they have treated us badly," one athlete told the Daily Nation newspaper.

Others are still stranded in Rio with marathoner and MP Wesley Korir issuing a barrage of tweets from Brazil deploring their treatment and alleging officials had left them languishing in a bid to find cheaper flights home.

President Uhuru Kenyatta said those found responsible for the shambles would "face the consequences of their actions".

"We will ensure that lessons are learnt, questions are answered, action is taken and full accountability achieved," Kenyatta said this week.

Sports minister Hassan Wario was questioned by detectives on Wednesday as calls for his resignation grew louder.

"He was asked to explain what exactly happened in Rio especially how the team was treated, the contingent that travelled to Rio and allegations by kit sponsors Nike over the allocation of uniforms," said a source at the Directorate of Criminal Investigations.

"It is certain that heads must roll," the source added.

Officials from the National Olympics Committee of Kenya (NOCK) are also due to be questioned.

On Thursday Wario put the blame on NOCK officials, announcing the disbandment of the committee and establishment of yet another "probe committee". The move was immediately contested by NOCK secretary-general Francis Paul who in turn blamed the government.

The discontent has made its way from the streets and the news pages to parliament. "The stories that were coming out of Rio were shameful and shocking," said MP Isaac Mwaura.

In a country where athletics is a major source of national pride the outcome of investigations will be a test for the Kenyan president and his repeated promises to hold the corrupt and inept to account.

But despite the combative rhetoric and the promised probes there is scepticism that any action will be taken by a government that has characterised the problems in Rio as "mishaps".

Perhaps the most astonishing fact of all is that Kenya's athletes triumphed, in spite of -- not because of -- the country's officials.

Some spectators allowed to return to sports events in England