SEOUL - Son Heung-Min is skipping South Korea's 2018 World Cup qualifier against Syria on Tuesday to return to England and get his Tottenham Hotspur career on track. 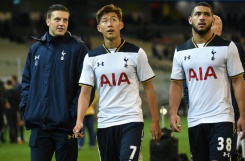 The 24-year-old forward moved from Bayer Leverkusen in August 2015 for a reported fee of around pound sterling22 million ($29 million), making him the most expensive Asian player yet.

Despite high expectations, Son made just 13 league starts for the London club and was overshadowed by stars such as Erik Lamela and Christian Eriksen, as well as England internationals Harry Kane and Dele Alli, who helped Spurs finish third, the club's highest placing since 1990.

The Korean's hopes of becoming a regular starter in his second season in the English Premier League have not been helped by a lengthy summer of international duty.

Son spent several weeks with South Korea for the Rio Olympics and World Cup qualification, missing all of Tottenham's three league games so far and much of the club's pre-season.

After playing in last week's 3-2 World Cup qualifying win over China, Son confirmed he will be in London with his country's blessing as his national team-mates take on Syria in Malaysia.

South Korea are letting Son return early, despite being under no obligation to do so, after Spurs released the player for the Rio Olympics.

"Tottenham are the team I wanted to join and I know that I have to work hard and play my best," Son said. "I am in good condition and ready to go and play as well as I can.

"I am sorry to my national team-mates and coach but I will support them and hope they get a good result against Syria," he added.

It has been a stressful few months for Son. When the English season ended in May, London's Daily Telegraph reported that Spurs were ready to sell the attacker.

This came just nine months after signing the Korean who had previously spent six successful seasons in Germany's top tier with Hamburg and Bayer Leverkusen.

The rumours persisted with further reports in England and Germany just before the end of the transfer window that VfL Wolfsburg had made a pound sterling17 million bid ($22.6 million) for Son.

"I haven't heard anything about my transfer," Son said. "I don't want to think about things happening outside the stadium. I just want to focus on playing football."

But Son, who scored more than 10 league goals in each of his last three seasons in Germany, admitted that the transfer stories were worrying.

"It's not a good sign that transfer rumours are coming out," Son said. "But I think it's meaningful that those in Germany acknowledge me."

Clubs do not have to release players for the Olympics, but had Son won a medal he could have been exempted from South Korea's compulsory 21-month military service, potentially extending his Spurs career or increase the size of any future transfer fee.

But the medal bid ended in tears when Son helped Korea to the quarter-final but missed three clear chances in a surprise defeat to Honduras.

It was Son's performances in Europe for Leverkusen, with five goals in the 2014/15 Champions League, that helped persuade Tottenham to bring him to north London. It is that form he would love to replicate this season.

The day I saw Greaves score a hat-trick