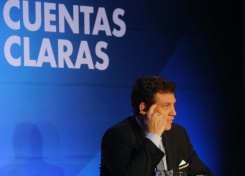 Alejandro Dominguez told delegates at the CONMEBOL congress that the organization had the opportunity to turn the page on decades of sleaze that saw generations of officials pocket millions of dollars in bribes.

South American football officials have been heavily implicated in the US-led investigation into corruption in world football which led to the downfall of FIFA president Sepp Blatter last year.

"We are making history. We are ready to leave the past behind and starting from today we can begin a new history for CONMEBOL," Dominguez said as the meeting got under way at an upscale Lima hotel.

"After a very difficult period for us, we plan a rebirth which will show the world our football development," he told delegates from CONMEBOL's 10 member nations.

The changes included a separation of political functions and day-to-day management, term limits for officials, greater participation of women in decision-making bodies roles.

A CONMEBOL official who asked not to be named told AFP the aim of the congress was to "clean up" the tarnished governing body.

FIFA's newly appointed general-secretary, Fatma Samoura of Senegal, was in attendance to witness the opening. "I wish you good deliberations for the development of football," she said.

No fewer than three former presidents of CONMEBOL -- Eugenio Figueredo of Uruguay and two Paraguayans, Juan Angel Napout and Nicolas Leoz, have been indicted in the US investigation, accused of accepting bribes.

Leoz ruled CONMEBOL from 1986 until he stepped down in 2013 and also served as a member of FIFA's powerful executive committee for a decade. He is alleged to have taken millions of dollars in kickbacks during negotiations for long-term sponsorship and marketing deals.

One of the anti-corruption reforms being introduced will limit the length of contracts between CONMEBOL and its sponsors.

"This congress will mark a turning point in the management of CONMEBOL," Peruvian Football Federation president Edwin Oviedo said. "Now contracts will be limited to four years rather than 12 years."

CONMEBOL's congress will also review the 2016 budget and results for the first half of the year.

Dominguez took the reins at CONMEBOL in January and soon sounded the alarm over the state of the organization's books.

"I knew when I was elected that CONMEBOL was in bad shape, but what I found defied the power of imagination. Disorganization, chaos," he told AFP in August.

No accounting records had been kept since 2011. There was no telling how much money had gone into unidentified pockets.

"CONMEBOL's objective was money and football was a means," he said.

He added he was proud to have cleaned shop.

"We've made the necessary changes and put capable people in key positions. We did an audit, reconstructed the accounts.... It was a big challenge, but today I think we're seeing results."