Paralympians, poor Rio kids teach each other about overcoming limits

RIO DE JANEIRO - French Paralympians got a taste of Rio's tough realities in a visit to a favela Friday but the impoverished children greeting the disabled athletes got an eye opener of their own. 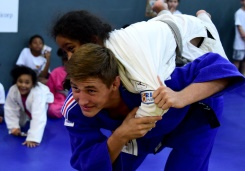 But the trip by a dozen French judokas and other Paralympians to Rocinha, the biggest favela of all, had a difference. Rather than just coming to witness the locals' difficulties, these visitors brought their own stories of overcoming terrible odds.

After leaving the bubble of the athlete's village in the posh Barra district, meeting about 30 young judo students in rough-edged Rocinha was a distinct reality check for the French.

"We are very lucky to be with them. Not all the children here have what they deserve: access to schooling, health, a roof over their heads. It's extremely important that we give them a little moment of happiness," said Sandrine Martinet, who won gold in the under 52kg category and has had poor sight since birth.

She and other French athletes were welcomed to the Instituto Reacao NGO by its founder, 2004 Olympic bronze medalist Flavio Canto.

"It's a great day because the champions are here," announced Canto, whose institute promotes access to sport and education for Rio's poor and has trained top judokas, including gold medalist at the Olympics this August, Rafaela Silva.

For about an hour, judokas, athletics team members and swimmers took part in the training, talked with the children and gave demonstrations. Each had a separate story of being blind or deaf or partly paralyzed or amputated.

They wanted to show that sport "doesn't have limits," Martinet said.

If the visitors were impressed by the obstacles Rocinha's young face in their attempt to build lives, the admiration was mutual.

Young judokas had their eyes blindfolded so that they could experience judo without being able to see. "I did it and it was really, really difficult," said 15-year-old Julia.

"They are incredible to be able to do judo without seeing," she said.

Renan, 11, was ecstatic after having been able to compete against Frenchman Cyril Jonard, who is deaf and has impaired vision.

"They don't have our advantages," Renan said, "but I don't feel sorry for them because they made us feel proud and they win even with handicaps."

It was a view mirrored by the French Paralympians when they looked at the young, hopeful residents of the favela.

Martinent praised the blindfolded children for "going at it full tilt" and said she was touched how afterward "they came for a hug."

"This favela is very big, very crowded and all these children don't have the same things as us in France. We need to show them that world of sport is interested in them," said Paralympic swimmer Elodie Lorandi, who won bronze for France in the 100m and 400m freestyle, and has a paralyzed leg.

Then she said: "We should do this more often in France because it's important to explain early to children what being handicapped means."