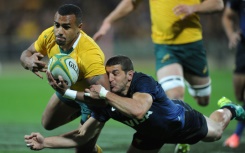 The Pumas never recovered from an opening salvo of three tries in the first 12 minutes as the Wallabies went on to win 36-20 in their last home Test for the year on Saturday.

It left the Pumas with one win from four encounters in this year's southern hemisphere tournament ahead of their final Tests against New Zealand and Australia.

"We started badly and were then disoriented on the field and did not react. We conceded 21 points to simple moves," Hourcade said after the match.

"We started well in the second half, but then they also reacted. We had a bad defence and that was the key.

"Errors in attack I can understand, but defensive mistakes and not paying attention, no.

"They are basic errors that we cannot commit, we know that if you mess up at this level, you concede points."

Hourcade praised man-of-the-match Will Genia and his Wallabies scrumbase partner Quade Cooper for their inventive attack that troubled the Pumas.

"They make some really good movement, we were wanting to take it to them but we made silly mistakes," he said.

Argentina finish off their Rugby Championship with a home match against tournament leaders New Zealand on October 1 followed by a match against the Wallabies in London a week later.