USA out of World Cup after Canada drubbing
Sports

USA out of World Cup after Canada drubbing

TORONTO (CANADA) - Matt Duchene scored twice as Canada sent the United States crashing out of the World Cup of Hockey with a 4-2 victory. 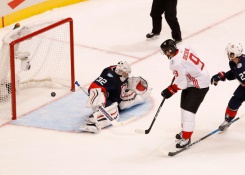 Matt Duchene (C) of Team Canada scores a first-period goal past Jonathan Quick of Team USA during the World Cup of Hockey in Toronto, Canada

Colorado Avalanche forward Duchene scored both his goals in a pulsating opening period as the hosts recovered after the USA took an early lead.

The USA's upset defeat to Europe on Saturday, and the Europeans subsequent victory over the Czech Republic on Monday, had left the Americans needing to beat Canada to have any chance of progressing from Group A.

The USA's hopes of a great escape were given a boost after four minutes of the first period, when New York Rangers captain Ryan McDonagh scored to make it 1-0.

But Canada responded in emphatic fashion, with Duchene grabbing his first of the night to level it after 5:51.

Fourteen seconds later, Canada took the lead, Anaheim Ducks forward Corey Perry supplying the finish to make it 2-1 on the night at the Air Canada Centre.

Duchene's second put Canada 3-1 and cruising to victory. Boston Bruins forward Patrice Bergeron made it 4-1 in the second period to leave the USA with a task that was to prove beyond them.

T.J. Oshie added a late consolation for the USA but it was too little too late.

In Tuesday's other game, Sweden goaltender Henrik Lundqvist produced a masterclass of shot-stopping as his team downed Finland 2-0 to take control of Group B.

Lundqvist made 36 saves to keep the Finns at bay after Swedish goals from Anton Stralman and Loui Eriksson.

"I felt pretty rusty the first period, not as aware as I wanted to be, but I got some really good help with some loose pucks and stuff like that," Lundqvist said.

"Then in the second and third I felt more and more comfortable. But it was fun. I really enjoyed being out there playing, a big game, an important game."

Sweden will guarantee top spot from Group B with a win or a defeat in overtime or shootout in their final game against North America.

"I haven't talked to the coach yet, but I want to go," he said. "It's an important game. We're not in yet, but he makes the call."