All Blacks three wins away from world record
Sports

All Blacks three wins away from world record 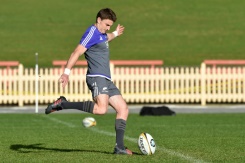 Should they succeed at the Estadio Jose Amalfitani, the All Blacks will then need to beat South Africa away on October 8 and Australia at home on October 22 to rewrite the record books.

New Zealand twice and South Africa once have won 17 internationals in a row with Australia playing party-poopers through a win and a draw each time the All Blacks sought to win 18 Tests on the trot.

The rugby giants in the black strip, winners of the World Cup a record three times, started the latest winning streak with a 41-13 hammering of the Wallabies in August last year.

Since that triumph, they have beaten Australia a further three times, Wales three times, South Africa and Argentina twice each and Namibia, Georgia, Tonga and France once each.

Many of the All Blacks' victories have been by wide margins with a 62-13 thrashing of the French in a 2015 World Cup quarter-final the most one-sided.

Argentina proved stubborn group opponents to New Zealand during the same tournament in England, leading for much of a game they eventually lost 26-16 in London.

When the teams met this month in Hamilton, the Pumas matched the All Blacks for 50 minutes before collapsing and finishing 57-22 losers.

"The Pumas challenged us for 50 minutes and if they can play like that for an entire match, it will be very difficult for us to beat them," he told a Buenos Aires media conference.

"They rank among the top rugby teams -- we saw that at the World Cup last year when they reached the semi-finals.

"Argentina have always been big and strong, now they are skilful as well and play a nice brand of rugby," said the 25-year-old successor to legend Dan Carter, who retired last year.

He changed four of the Kieran Read-skippered team that began a 41-13 demolition of South Africa in Christchurch two weekends ago.

Argentina, beaten 36-20 in Australia in round 4, will look to a hoped-for 50,000 crowd to inspire captain Agustin Creevy and a team boasting star half-backs Nicolas Sanchez and Martin Landajo..

"New Zealand are the best team in the world and we have prepared to the best of our ability," said Daniel Hourcade, the coach credited with making the Pumas a stronger all-round team.

"Good though the All Blacks are, playing them does not intimidate us -- it motivates us."