CHASKA (UNITED STATES) - A heavyweight foursome kicked things off in an amphitheatre-type setting on the opening tee as the 41st Ryder Cup between the USA and Europe started Friday. 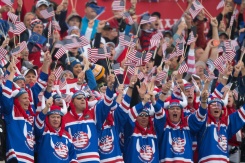 Thousands of fans jammed the grandstand or stood 25 deep outside the gallery ropes at the opening hole as the players smiled and waved to the crowd before hitting their first shots on a cool, foggy morning at Hazeltine National Golf Club.

The festive atmosphere for the first foursome, featuring Europeans Justin Rose and Henrik Stenson against Jordan Spieth and Patrick Reed of the host USA, was punctuated by plenty of catcalls and loud chants from fans on both sides.

There were colourful costumes, bright flags draped over iron railings in the mostly red, white and blue coloured gallery as Rose smacked the first ball down the middle of the fairway to get things started.

Rose is ranked 11th in the world the other three in the group are all in the top ten.

Reed, wearing a short sleeved red polo shirt, then stepped up and braved the slight breeze and cool temperatures as he hammered his first shot onto the fairway signalling that another Ryder Cup battle was officially underway.

It is a Ryder Cup tradition for fans to wear costumes and opening day at Hazeltine was no different. A fan in a boxer Rocky costume was front and centre in the grandstand and another dressed as Elvis with a sign "Win it for Arnie" had a prime standing position on the ropes along the first fairway.

John Hames, of Eagan, Minnesota, said the Americans will draw extra inspiration this year from the memory of golfing legend Arnold Palmer who passed away on Sunday.

"I am hoping the spirit of Arnold will push us forward," said the 34-year-old chief financial officer. "The guys are going to channel that, especially Phil Mickelson."

US fan Jeff Winter, of Aspen, Colorado, said the Americans will benefit from playing in front of adoring crowds.

"The US has the home course advantage," said Winter, who works in transportation planning. "They haven't won for awhile so there is a lot of motivation."

Brothers Ben and Dominic Lee travelled all the way from Newcastle to see their European heroes perform.

"It will be close but Europe will win. Our rookies have got nothing to lose so there is no pressure on them," said Ben, who works as a postman.

The brothers won an all expense paid trip to Minnesota for the Ryder Cup by finishing first in a local golf tournament.

Ben said it is a challenge to get themselves heard amongst the sea of red, white and blue fans.

"The Europeans could all have megaphones and they still wouldn't make a noise," Ben said.

American fan Jonathan Coleman, 27, said the Ryder Cup brings out the patriot in him.

"I was born and raised in this country," said Coleman, who works as a caddie at a golf course in Cincinnati, Ohio.

"The US will win because they have a lot of good players who are playing really well right now."