BEIJING - Madison Keys outbattled Petra Kvitova in the China Open quarter-finals on Friday, gaining revenge for her defeat by the Czech in the bronze medal match at the Rio Olympics. 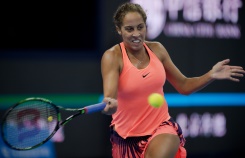 Madison Keys of the United States in action against the Czech Republic's Petra Kvitova during their China Open quarter-final in Beijing on October 7, 2016

A double fault by Kvitova turned the first set in favour of Keys, but she pulled back in the second, pushing it to a tiebreak, which she won.

There was little between the pair in the final set, but Kvitova's 32 unforced errors to Keys' 25 ultimately cost the Czech a semi-final place -- and ended her eight-match winning streak.

"She made it really tough today. I'm just really happy that at the end I was able to get my serve back on track and get myself ahead in the tiebreaker," Keys said.

Kvitova has had a year of ups and downs since she split with her coach of seven years David Kotyza after the Australian Open in January.

She ended last year runner-up in the WTA Finals in Singapore but this season she has failed to get past the round of 16 at any of the Grand Slams and her ranking fell to 16 -- its lowest since 2011.

Keys, 21, made her top 10 debut this year after winning her second career title in Birmingham in June.

The big hitting youngster -- who is often cast as a successor to 22-Grand Slam champion Serena Williams -- is also chasing her first qualification for the elite WTA Finals in Singapore, which features the season's top eight players.

With her quarter-final win she moves into seventh in the Race to Singapore leaderboard, but Briton Johanna Konta is hot on her heels and she needs to win the title in Beijing to clinch her spot.

On the men's side, Spaniard Pablo Carreno Busta beat Richard Gasquet in a rain-delayed second round match, 5-7, 6-4, 6-1, to set up a quarter-final clash with Wimbledon finalist Milos Raonic later Friday.