WELLINGTON - New Zealand coach Steve Hansen warned his history-making All Blacks Sunday not to get too far ahead of themselves as they were showered with praise following their record-breaking 57-15 thrashing of South Africa. 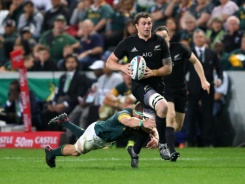 The Planet Rugby website rated the All Blacks "phenomenal", particularly in the second-half when they scored 45 points and conceded only six

Former All Blacks captain Sean Fitzpatrick, speaking on SkySports in England, hailed the current side as "the best ever" after the nine-try demolition took them to a world record-equalling 17th consecutive victory.

The Planet Rugby website rated the All Blacks "phenomenal", particularly in the second-half when they scored 45 points and conceded only six, describing the performance "as one-sided a game as you will see at Test level".

The All Blacks embarrassed the Springboks in their Durban fortress, producing their highest score and biggest-winning margin against their arch rivals in 93 Tests dating back to 1921.

They became the first team to go through a Rugby Championship season scoring four or more tries in each Test, and if they beat Australia when they clash in Auckland on October 22 they will become the most successful ever top-tier side.

"The @AllBlacks are playing a different game to anybody on the planet at the moment. Just a joy to watch. Power pace and skill," tweeted former Wales and British and Irish Lions backrower Scott Quinnell.

But Hansen said while the current crop of All Blacks were "a good side" and determined to get better, he noted that Australia have a history of upsetting them.

"I wouldn't get too far ahead of ourselves," Hansen said in Durban. "If we're going to go one step further we've got to make sure we prepare really well. Australia are a good rugby side.

"They've got a history of turning up when there's a record on the table."

The All Blacks have convincingly beaten the Wallabies twice already this year -- 42-8 in Sydney and 29-9 in Wellington.

Hansen said while there was no guarantee they would win the third encounter, setting records and creating history was their aim.

"They're a team that want to get better and do things other teams haven't done. That's been the case with this group since 2012. We're trying to find different horizons all the time."

Fitzpatrick, in his praise of the All Blacks, noted they have not missed a beat despite losing 800 caps worth of experience -- including legends Richie McCaw and Dan Carter -- after winning the World Cup last year.

"This team has taken rugby to a new level," Fitzpatrick said.

"They put a line in the sand after the World Cup last year, lost all that experience, seamlessly have gone into this team and created their own identity."