BEIJING - Marcello Lippi will earn almost $5 million a year as China coach but will pocket far more through a tie-in with a football academy, state media said Sunday. 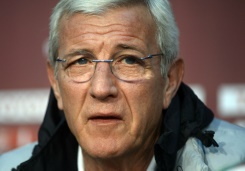 Marcello Lippi's annual salary as China coach "should be in the region of 4.5 million euros ($4.9 million)" said state broadcaster CCTV on an official social media account

The 68-year-old Italian was named boss of the national team by the Chinese Football Association (CFA) on Saturday. He has the tricky goal of steering the Asian giant to qualify for the 2018 World Cup -- a near impossible feat given recent losses to Uzbekistan and war-torn Syria.

But the offer made to the Italian also includes income from Guangzhou Evergrande's football academy which will pay "Lippi and his team" 15.5 million euros annually to act as official "advisers" for the establishment, CCTV said.

The club, which is riding high atop the Chinese Super League, did not confirm the figure when contacted by AFP.

Lippi coached Evergrande to great heights, leading the side to three consecutive Super League titles between 2012 and 2014.

He was due to work with the club next season, but Evergrande announced Saturday it was breaking the agreement so the Italian could take the reins at a national level.

Lippi is committed to Guangzhou's football academy until "the end of January 2019", CCTV said. The CFA did not give details about the length of Lippi's contract.

The Guangzhou-based Southern Metropolis Daily, citing sources close to the Italian, reported that "as well as the CFA, the highest levels of government also invited Lippi" to coach the national side, a move that had "a direct bearing on his decision".

Improving the level of football at club and national level has been a priority for President Xi Jinping. Even before taking office he underlined his ambitions for China to qualify for the World Cup, to host the event and to one day win it.

Lippi, who masterminded Italy to their most recent World Cup triumph in 2006, has his work cut out in his latest assignment.

China, the most populous nation on earth, languish a lowly 84th in the FIFA world rankings -- sandwiched between Kenya and Guatemala.

They have claimed just one point from four games in the latest World Cup qualification phase and are bottom in Group A, which includes Iran, Uzbekistan, South Korea, Syria and Qatar.