MOSCOW - Moscow's Sheremetyevo airport, the largest in Russia, has invested $865 million into building a new terminal and expanding its operations ahead of the 2018 World Cup, its chief executive said Tuesday. 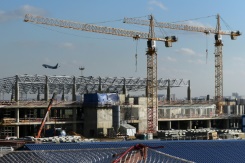 The construction site for the new terminal B at Moscow's Sheremetyevo airport, part of preparations for the 2018 FIFA World Cup, pictured on Oct 25, 2016.

"We can say with certainty that the construction is moving along according to our deadlines and ahead of schedule in certain cases," Sheremetyevo's CEO Mikhail Vasilenko told reporters.

"This will allow us to have all the necessary infrastructure for the World Cup so that the country's guests feel at ease."

Sheremetyevo's expansion, which is mostly funded by private money, is expected to raise the airport's capacity from 35 million to 55 million passengers per year.

The upgrade will allow the airport to handle 90 takeoffs or landings per hour, as opposed to the current 55.

As part of the investment Sheremetyevo, which serves as the hub of Russia's flagship carrier Aeroflot, will be building a $305-million terminal for domestic flights.

The new terminal will be linked to the existing ones by a railway tunnel worth $245 million, which is being built below the runways without affecting air traffic.

A third runway, as well as a cargo facility, will also be constructed in the expansion.

Inaugurated in 1957, Sheremetyevo is set to carry more than 33 million passengers this year.

Its capacity is expected to reach 80 million passengers per year in 2026, Vasilenko said.

Russia will host the 2018 World Cup in 11 cities including Moscow, Saint Petersburg and Sochi.