SYDNEY - Record scorer Tim Cahill has been left out of Australia's squad for their World Cup qualifier against Thailand as he recovers from "soreness", the team said on Wednesday. 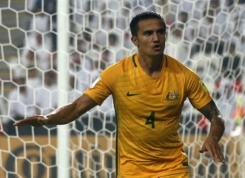 Australia's Tim Cahill has scored 48 goals in his 94 international appearances for the Socceroos.

Australia coach Ange Postecoglou said Cahill, who has scored a record 48 goals for his country, was being rested rather than dropped for the game on Nov 15.

"Tim has been left out primarily because we have a 10-day lead-in... and I want to be able to put the squad through a lot of work," Postecoglou said.

"He has done a lot of travel for club and country and I have decided it is better he remains in Melbourne where he is being managed well to ensure he is back on the park as soon as possible and ready for us down the track," he added.

Cheering was set to be banned at the qualifier in Bangkok as part of Thailand's mourning for its late king, who died last month, but local authorities on Wednesday said they would relax strict rules in place.

As the final round of qualifying for Russia 2018 hits the halfway stage, Australia lie second in their group, two points behind Saudi Arabia, with Japan third.

"With the group so tight it is important that we put in a good performance to ensure we can continue to be amongst the front runners," Postecoglou said.

Thailand should look beyond tourism and make the transition to a digital economy to generate more revenue for the country, Jirayut Srupsrisopa, the founder and CEO of Bitkub Capital Group Holdings, said on Thursday.

The Thai women's volleyball team lost 3-1 to the Dominican Republic on Thursday as their hope to play in the finals is now in jeopardy.