LOS ANGELES - Former World Anti-Doping Agency (WADA) chief Dick Pound has called for a tough stance on Russia's doping violations as the sports world braces for the release of a new investigation into accusations of state-run cheating. 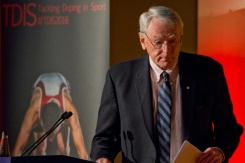 Former President of the World Anti-Doping Agency, Dick Pound says Russia must be dealt with firmly to prevent doping in sports

Pound, the International Olympic Committee's representative on the WADA Foundation Board, said firm action against Russia was necessary to deter other nations from widespread doping.

"I think if we are sufficiently firm with Russia, there will be an enormous deterrent effect," Pound told AFP in a wide-ranging interview ahead of the December 9 release of a report by Canadian law professor Richard McLaren expected to shine more light on doping in Russia.

The first part of the McLaren report, commissioned by WADA after revelations by the former head of the Moscow anti-doping laboratory, was published in July and detailed an elaborate state-sponsored scheme in Russia to manipulate drug tests at the 2014 Sochi Winter Olympics and Paralympics.

Publication of the report plunged the Olympic movement into chaos on the eve of the Rio de Janeiro Games, with the IOC and WADA at loggerheads over how best to sanction the Russian Olympic Committee.

Pound believes the IOC's failure to impose a blanket ban on Russia from Rio represented a missed opportunity, and undermined the organization's repeated pledges of a "zero tolerance" policy on doping.

"There was an opportunity to send the message by saying 'no matter who you are, how important is your country, if you cheat, there will be consequences'.

"The IOC is nothing if it has no ethical principles, it is always hoped to be the ethical leader of sport, here was a chance to demonstrate that."

The IOC ultimately left it up to international sports federations to determine whether or not they would allow Russian athletes to take part in Rio, a decision which drew stinging criticism from anti-doping officials.

Pound said the IOC's response to the McLaren report had been influenced by Russia's status as a sporting superpower.

"You and I both know that if the country involved had been Guatemala, the answer would have been quite different," he said. "It's the fact this is Russia that seems to create a problem for the IOC."

Pound said he had not seen the contents of the second McLaren report but expected it would paint a "very, very damaging" picture of Russian sport that would require a severe response from the IOC.

"To be switching samples in the middle of the Olympics in your country, it's a huge attack on the Olympics," Pound said.

"The Olympics are going to have to take a very strong stand on that, or they will lose more credibility."

Pound said WADA should be given the authority to impose its own sanctions on countries deemed to have broken anti-doping rules, with the right of appeal to the Court of Arbitration for Sport.

"We have a very good system in place, what we do not have is a commitment of the people in that system to make it work," Pound said.

"The international federations are not keen, most governments are not committed to it, as we saw with the Russian national antidoping organization, we think there are many other countries who have similar approach to that.

"We are now trying to look at enhancing that process. One of the suggestions we just put in place is now to give WADA the power to issue provisional sanctions which could be appealed to the CAS of course, but rather than simply reporting there have been violations and relying on an international federation, a country or a NADO (National Anti-Doping Organization) to impose a sanction, is to have means of action," Pound added.

Pound meanwhile said Russia's rehabilitation after a year of sensational doping revelations could only take place if Moscow acknowledged the extent of the problem. However Pound said Russia had so far sent mixed signals over its response to the various doping claims.

"Clearly there are some people there that understand that change has to occur, some of the coaches and bureaucrats have been suspended," Pound said.

"But on the other hand, the Minister of Sport is promoted to deputy prime minister in charge of sport and tourism, it is a reward.

"The Russian NOC (National Olympic Committee) president is promoted to deputy prime minister, there are ongoing statements that there was no state involvement, there are threats to put anybody who reports otherwise in jail, blanket denial of any involvement, it is not a good sign.

"You can cure many illnesses, (but) it is not possible to treat the persons involved until leadership acknowledge there is a problem.

"Russia has to come to the table and say: 'We have done our own look at this, yes, there was a problem, yes, we have to solve that, give us the steps we need to go through, we will try to do that, we hope we can get it done to be back in good status in Pyeonchang'.

"But in order to do that, they've got to accept their responsibilities first."