MADRID - Veteran Spanish rider Joaquim "Purito" Rodriguez announced he is to retire on Friday, bringing to an end a successful 17-year career. 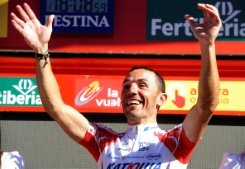 Spain's Joaquin "Purito" Rodriguez, seen in 2011, said of his retirement December 9, 2016, "I believe it's better not to come back if I am not sure of being able to do it at the top level"

"After taking my time to think, and trying to come back to a working routine, I realised it is not possible for me," Rodriguez, 37, said in a statement posted on his Instagram account.

"That's why I have taken, with the help of my family and friends, the decision of not coming back to the competition.

"I believe it's better not to come back if I am not sure of being able to do it at the top level."

Rodriguez had signed a contract with new WorldTour team Bahrain-Merida for the new season, but will instead now act as a mentor to younger riders in the team.

"A big thank you also to the team Bahrain-Merida. They believed in me, they gave me all the facilities for a return, but I realised, speaking with them, that I am not prepared physically, and mentally, for a come back at 100 percent," continued Rodriguez's statement.

"I will work in the future for the team Bahrain-Merida, trying to help and transmit all my experience to the young riders in the team."

Rodriguez won 14 Grand Tour stages in his career, and finished second at the Giro d'Italia in 2012 and Vuelta a Espana in 2015.

His best ever return at the Tour de France was third in 2013.