Teerasil out of King's Cup side
Sports

Teerasil out of King's Cup side

Coach Rajevac rules out any reinforcement

Thailand coach Milovan Rajevac has refused to call up another forward to the national team after prolific striker Teerasil Dangda pulled out of the King's Cup squad. 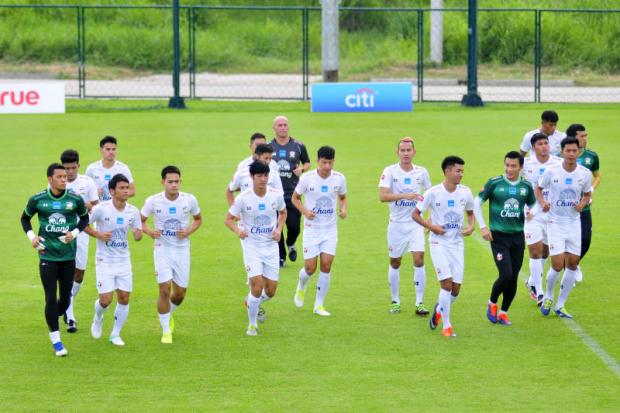 Thailand take on North Korea on Friday at 7.30pm after the match between Belarus and Burkina Faso at 4.30pm.

The winners of the two matches will face off in Sunday's final, while the losers will meet in the third-place play-off match earlier on the same day.

All matches will be live on Thai Rath TV.

The national team players reported for training at the Football Association of Thailand (FAT) headquarters in Hua Mark yesterday.

Teerasil's Thai League 1 club SCG Muang Thong United informed the FAT in a letter that their striker had decided to pull out from the King's Cup team.

The statement said that Teerasil had withdrawn because of his lack fitness and his mental state after the recent death of a relative might affect his performance.

Rajevac told the media yesterday: "Although Teerasil has pulled out, we still have 24 players in the team so we will not call up another player to replace him."

The 24 players started training at Kiarti Thanee Country Club yesterday and the number will be eventually reduced to 23 for the tournament.

Rajevac added: "Today is the first day of training to prepare for the King's Cup. I understand that it is a very important event for the Thais and everyone wants to see the national team win the title.

"I hope that the good coordination we developed during the World Cup qualifiers will help us achieve good results.

"As for the other three teams, all of them are very strong, so we would have to prepare ourselves well."

Meanwhile, the Thai U23 team also reported for training to prepare for the qualifying event for the AFC U23 Championship.

Coach Worawut Srimakha said: "There are many players who have not turned up for training but it should not affect our plans.

"We are hoping to get at least seven points or may be even nine.

"We want to test all of our players over these three matches as we want to see how well they perform.

"I am also worried about injuries because some players are not fit. I don't want to risk them as it may hurt our chances in next month's SEA Games in Malaysia."

Thailand U23 team are in Group H along with Mongolia, Malaysia and Indonesia.

They will play their first match against Mongolia on July 19, before facing Malaysia on July 21 and Indonesia on July 23.

All matches will be played at Supachalasai Stadium.

The 10 group winners and five best second-placed teams from among all the groups will advance to the finals.

The football tournament at the SEA Games is for U23 players.