Kwiatkowski warms up for Milan-San Remo with Tirreno-Adriatico win 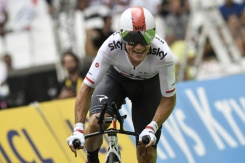 Poland's Michal Kwiatkowski crosses the finish line at the Velodrome stadium at the end of an individual time-trial, the twentieth stage of the 104th edition of the Tour de France cycling race on July 22, 2017

Australian Rohan Dennis of BMC won the seventh stage -- a 10km individual time-trial made difficult by a late shower of rain -- but Kwiatkowski extended his overall lead to 24 seconds ahead of Italy's Damiano Caruso (BMC).

Sky teammate Geraint Thomas of Wales moved up a place to take third at 32sec in 'The Race between Two Seas' which finished in San Benedetto del Tronto, a resort on the Adriatic coast.

"It was nervy from my point of view and when I was warming up it started raining. It was scary as anything could happen," said Kwiatkowski.

"I'm happy me and Geraint could finish on the podium. I know he had some back luck but at the end of the day we played it tactically really well," he said referring to a bike change at a crucial mountain moment that cost Thomas time.

"It was a really good race, straight from the start in the team time trial."

Kwiatkowski's attention now turns to the Milan-San Remo where he is the defending champion.

"My motivation will be even bigger as I had some great feelings here. I'm already thinking about Mila-San Remo on Saturday. I just need to recover," said the Pole.

The 27-year-old, who had been wearing the leader's blue jersey since Sunday, was never really threatened in the time-trial.

Australian Dennis, already winner of last year's time-trial, was helped by the fact that the 30 best placed riders started after the rain.

"To be honest I was nervous about it," said Dennis.

"I knew I needed to try and go faster than last year to win and I was right because Jos Van Emden (Team LottoNL-Jumbo) did the same time that I did last year. So, if I hadn't beaten my time he would have won."

Caruso had been just three seconds behind Kwiatkowski going into the final stage but never threatened the Pole who finished 11th on the stage, the same time as Sky teammate Chris Froome.

Four-time Tour de France champion Froome, involved in an ongoing probe into an adverse doping test, was off form all week.

"The team finished this race in good heath and good condition for the Milan-San Remo and for the Belgium (classics)," added Bora team rider.