It's four in four for Thai takraw heroes
Sports

It's four in four for Thai takraw heroes

With only one event left, Kingdom fall way short of 17-gold target at Jakarta Palembang 2018

With Thailand having next to no chance of bagging another gold in the final day's mixed triathlon event, the Kingdom's haul at Jakarta Palembang 2018 is all likely to stay put at 11 gold medals -- one short of their total at Incheon 2014.

There were hopes of victories in the women's indoor volleyball final and women's 60kg boxing but they didn't end up amounting to anything golden.

Besides the gold in sepak takraw's women's quadrant event and silvers in women's volleyball and boxing, a bronze was contributed by the Thai mixed doubles bridge team yesterday.

The Thais scored a lopsided 2-0 (21-18, 21-10) victory over Vietnam in the gold-medal match of the women's sepak takraw quadrant event.

It wrapped up a commendable performance by the Thai sepak takraw stalwarts, who were allowed to participate in only four of the six events in the discipline by the Games organisers.

Pairoj Acharungroj, manager of the Thai women's sepak takraw team, said his players were under a lot of pressure before the start of the final.

"We knew we had a great chance of winning the quadrant final, but we were all very stressed," said Pairoj.

"It was our last match of the tournament and we were under pressure to win it and deliver on our promise of winning four gold medals in the Games. We just couldn't lose.

"The scores may not suggest it but it was a haphazard performance by the team. We did so many things the wrong way but still won. I am a relieved man now."

The women's indoor volleyball final turned out to be a big mismatch as China mercilessly decimated Thailand 3-0 in a little more than an hour.

Thailand, playing in their first ever Asiad final, were outclassed in every department of the game as the Chinese women claimed their eighth gold medal, winning the one-sided clash 25-19, 25-17, 25-13.

However, this is Thailand's best ever performance in the Asian Games indoor volleyball competition after claiming their first ever medal in the discipline -- a bronze -- at Incheon 2014.

In boxing, Sudaporn Seesondee put up a brave fight in the women's 60kg final but still went down to Oh Yeon-Ji of South Korea as Thailand ended their bid without a single gold medal in Jakarta Palembang 2018 ring.

Sudaporn lost the bout 4-1 on points.

It is the first time since 1986 that Thailand failed to win a boxing gold medal at the Asian Games.

Another female fighter, Nilawan Techasuep (57kg), was also beaten in the semi-finals.

They all received the bronze medals yesterday.

Taristchollatorn Chodchoy and Terasak Jitngamkusol shared the bronze with Indonesia in the mixed doubles bridge event with Taiwan recording a one-two finish. 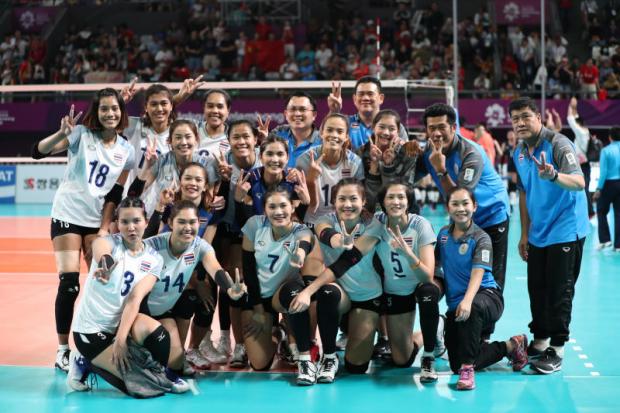