A missed penalty by forward Adisak Kraisorn (left) put Malaysia through to the Suzuki Cup final. (Photos by Wichan Charoenkiatpakul)

A drama-filled second leg of the 2018 AFF Suzuki Cup semi-final saw two-time defending champions Thailand bow out Wednesday night following a 2-2 draw that gave Malaysia a place in the final on the basis of away goals.

It wasn't a great performance by either team but there was no shortage of excitement in the spine-chilling battle as two heroes turned villain in the end.

Adisak Kraisorn, the top scorer of the tournament, first forced a last-minute penalty and then missed from the spot what could have been the most cherished goal of his career.

For the Malaysians, it was defender Muhammad Syahmi who conceded the penalty and took a red card after bringing the visitors back from the dead by netting their first equaliser of the night at the Rajamangala National Stadium.

After a goalless draw at Bukit Jalil on Saturday and with a place in the biennial Southeast Asian championship's final at stake, the two sides made a nervy start to the match and it took them quite some time to settle down.

Thailand made two changes to the team that started in the first leg with Mongkol Thossakrai and Philip Roller coming in.

While Roller had a busy time in the Thai defence, Mongkol's presence was felt only on a few occasions and that too not necessarily for the right reasons.

With Thai playmaker Sanrawat Dechmitr almost bogged down, there was a lack of creativity in the midfield and the Malaysian defence remained mostly unbothered in the first half.

It was a move initiated by Supachai from the left that ended up with Thitiphan Puangjan unleashing an angular header which was deflected into his own goal by Malaysia's Irfan Zakaria in the 21st minute.

For a brief period it appeared as if the War Elephants had wrested control from the visitors but a spectacular drive from Muhammad Syahmi seven minutes restored parity and gave Malaysia the away goal advantage. 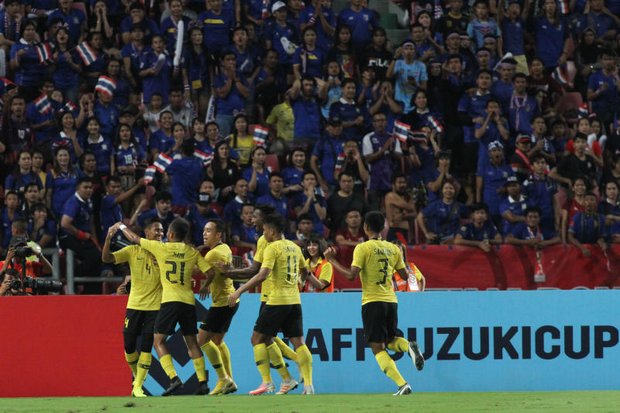 Muhammad Syahmi (left) and teammates celebrate in front of shocked Thai fans after he scored the opening goal in the match at Rajamangala National Stadium.

The Thais ventured close to the Malaysian goal on a few occasion but couldn't find a way to end the stalemate and two teams went into the breather tied 1-1.

A substitution early in the second half changed the complexion of the game one more time and put the home team on top again.

Sumanya Purisay, who replaced Mongkol, was instrumental in delivering Thailand's second goal with his first touch — a free-kick — which led to Pansa Hemviboon heading home.

However, there was more drama in store as the Malaysians hit back again with a Norshahrul Idlan strike that rendered Thai goalkeeper Chatchai Butrprom helpless in the 71st minute.

On par with Idlan's goal was Adisak's miss as the two proved vital for the Malaysians in the end.

Meanwhile, co-title favourites Vietnam head into the decisive semi-final second leg against the Philippines in front of what's expected to be a sold-out My Dinh Stadium in Hanoi on Thurday evening.

Vietnam won the first leg 2-1 in Bacolod with goals in either half from Nguyen Anh Duc and man-of-the-match Phan Van Duc.