Members of the Thai women's badminton team pose with their gold medals at the SEA Games in Manila on Tuesday. PR

Thai badminton stars continued their reign of the women's team event, winning their fourth straight gold medal in the SEA Games in the Philippines on Tuesday.

The Thais also savoured success in ice skating as Natthapat Kancharin grabbed the eighth gold medal for the Kingdom at the 30th edition of the biennial event.

The Thai shuttlers defeated 14-time winners Indonesia 3-1 in the final.

The Thais were put on course by 2013 world champion Ratchanok Intanon at Muntinlupa Sports Complex in Manila.

A lapse in concentration allowed Indonesia's Gregoria Mariska Tunjung to level the score at 1-1 but Ratchanok recovered to take the final game and put the Thais ahead with a 21-13, 12-21, 21-14 victory.

However, Busanan Ongbamrungphan and doubles tandem of Chayanit Chaladchalam and Phataimas Nuenwong then overpowered their opponents with ease to ensure that the Thais pick up their fourth gold medal in a row in the competition.

Chayanit and Phataimas then sealed a 21-8 , 21-17 triumph over Siti Fadia Silva Ramadhanti and Ribka Sugiarto.

Each member of the winning team will get a cash reward of 300,000 baht from the National Sports Development Fund.

Khunying Patama Leesawadtrakul, president of the Badminton Association of Thailand, praised the Thai team for claiming the gold medal.

"It was an excellent performance by every member of the team that won us the gold medal today," she said.

"This guarantees that we are the top nation in Asean when it comes to women's badminton. Our next target will be to defend the title again at the next SEA Games."

Ratchanok, Busanan and Rawinda will not be able to help the team in the remaining badminton events of the SEA Games.

The trio have qualified for the season-ending BWF World Tour Finals in Guangzhou, China, next week. 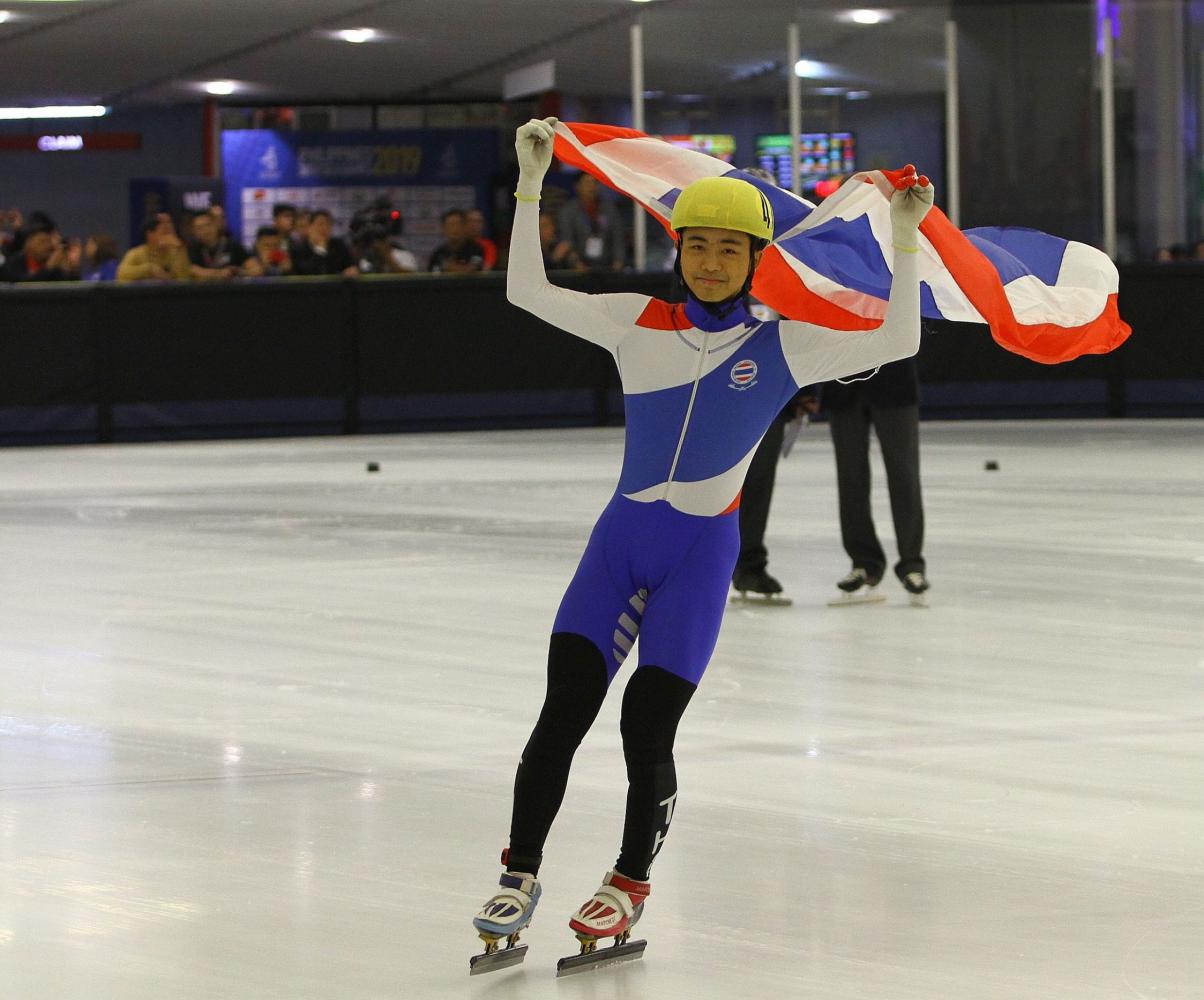 Natthapat was in a brilliant touch on Tuesday as he dominated the men's short track speed 500m event to add the second gold of the day to the Thai tally.

Natthapat left everyone in his wake as he raced to win the four-man final in 47.763 seconds, beating Indonesia's Stevanus Wihardja to second spot.

A handful of silvers

There were some silver medals as well for the Thai contingent on Tuesday.

In gymnastics, Surintornta Tikumporn (13.833 points) was a distant second to the Philippines' Yulo carlos Edriel, who took the men's floor exercise gold with a total of 14.700 points on Tuesday.

In wushu, Kittisak Suksanguan lost two rounds of the men's sanda 65kg final to the host country's Clemente Tabugara Jr to settle for the silver medal following a 2-1 loss.

Meanwhile, powerful Typhoon Kammuri forced organisers of the SEA Games to reschedule about half of the events set for Tuesday, but they pledged the competition would finish on time.

The storm, which made landfall late on Monday, wrought particular havoc on water-based and outdoor events, causing approximately 16 of them to be postponed.

However, roughly 17 other competitions -- primarily indoor ones -- were supposed to go ahead as planned, a statement from the organisers said. This year's SEA Games in Clark, Manila and Subic started officially on Dec 1 and end on Dec 11. 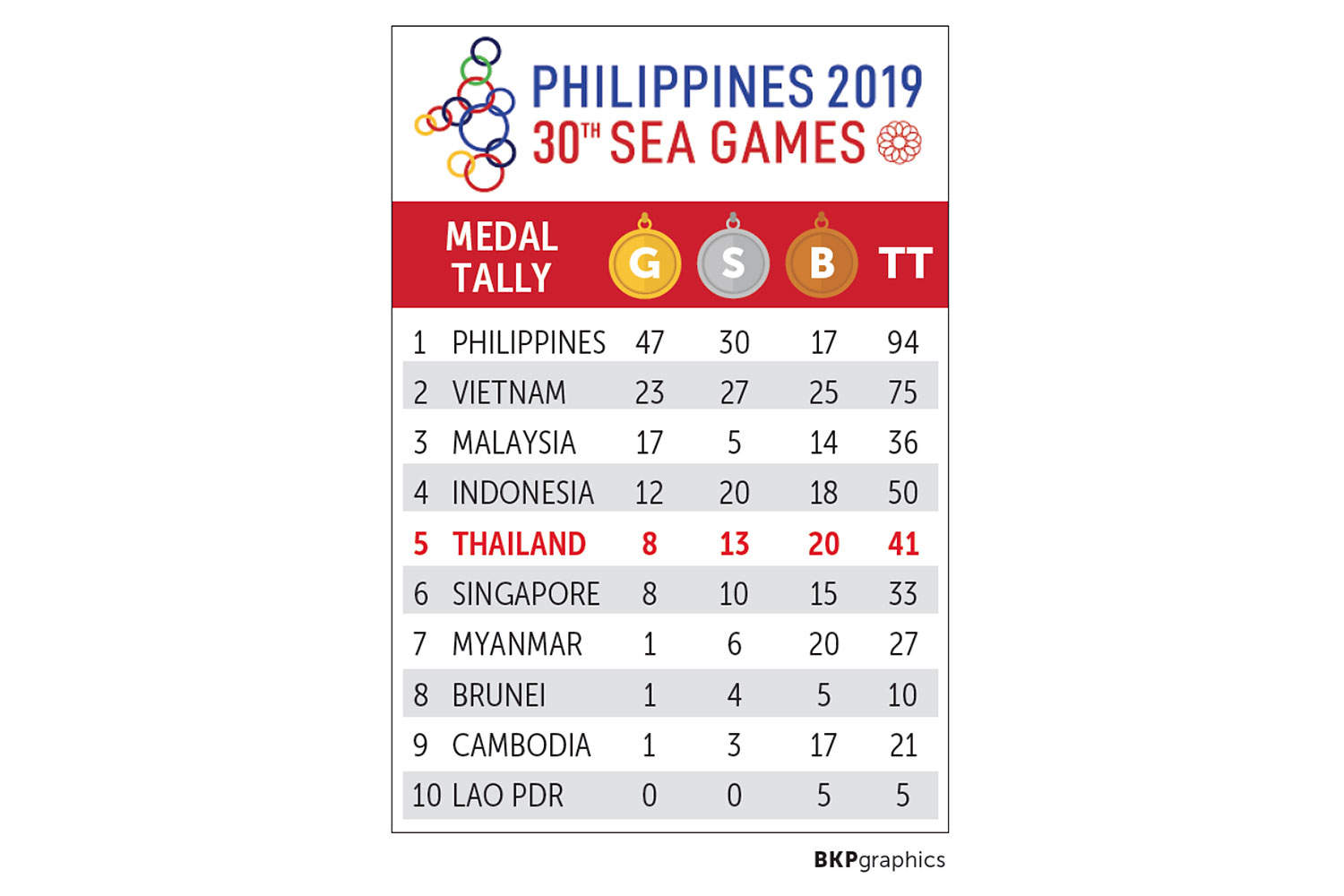