Thailand picked up four more gold medals at the 30th SEA Games with victories in duathlon, pencak silat and judo after the sixth day of action in the Philippines yesterday.

The Kingdom's stars remained sixth in the overall medal standings with 17 gold medals at press time while the host nation still held a comfortable lead over their regional rivals with 63.

The day started well for the Thais as the quartet of Pareeya Sonsem, Srinate Nattawut, Siriwan Kuncharin and Arthit Soda grabbed the mixed relay gold of the duathlon tournament.

In a gruelling battle involving cycling and running, the Thais outperformed athletes from four other nations to finish in a total time of 1:27.68 minute, almost a couple of seconds faster than second-placed Singapore.

Thailand were the fastest in three of the four-leg final, only finishing narrowly behind Singapore in the third leg. The Philippines settled for bronze medal in the event. 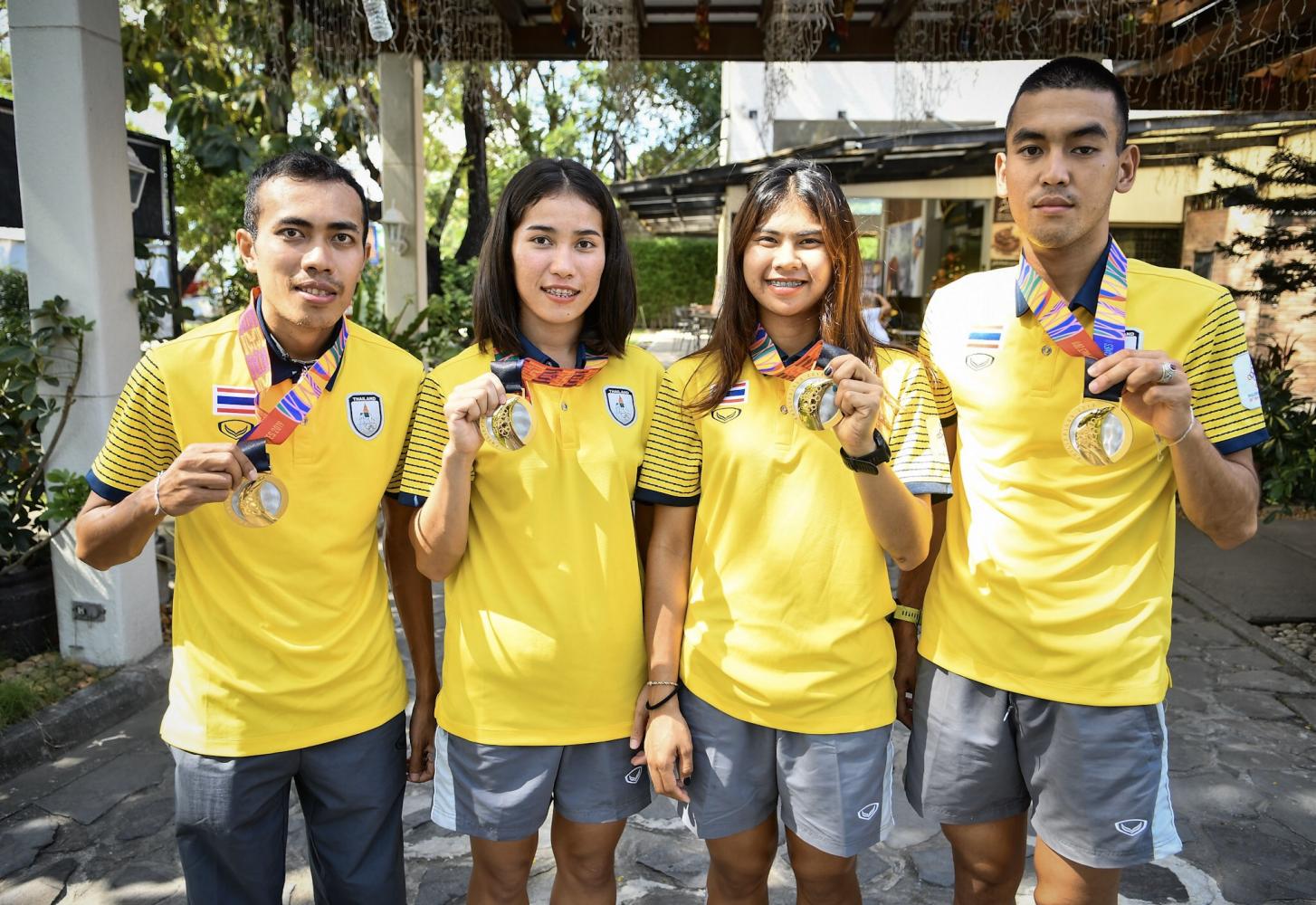 Nitinai Thamkaeo overcame an early blow in pencak silat's men's tanding class A 45-50kg final to capture the second gold of the day for the Thai contingent yesterday.

Indonesia's Khoirudin Mustakim rattled the 19-year-old Thai with a vicious kick early in the first, but Nitinai hit back and was soon on top on his opponent.

Nitinai then dominated the rest of the duel to record a 4-0 victory over his Indonesian rival. 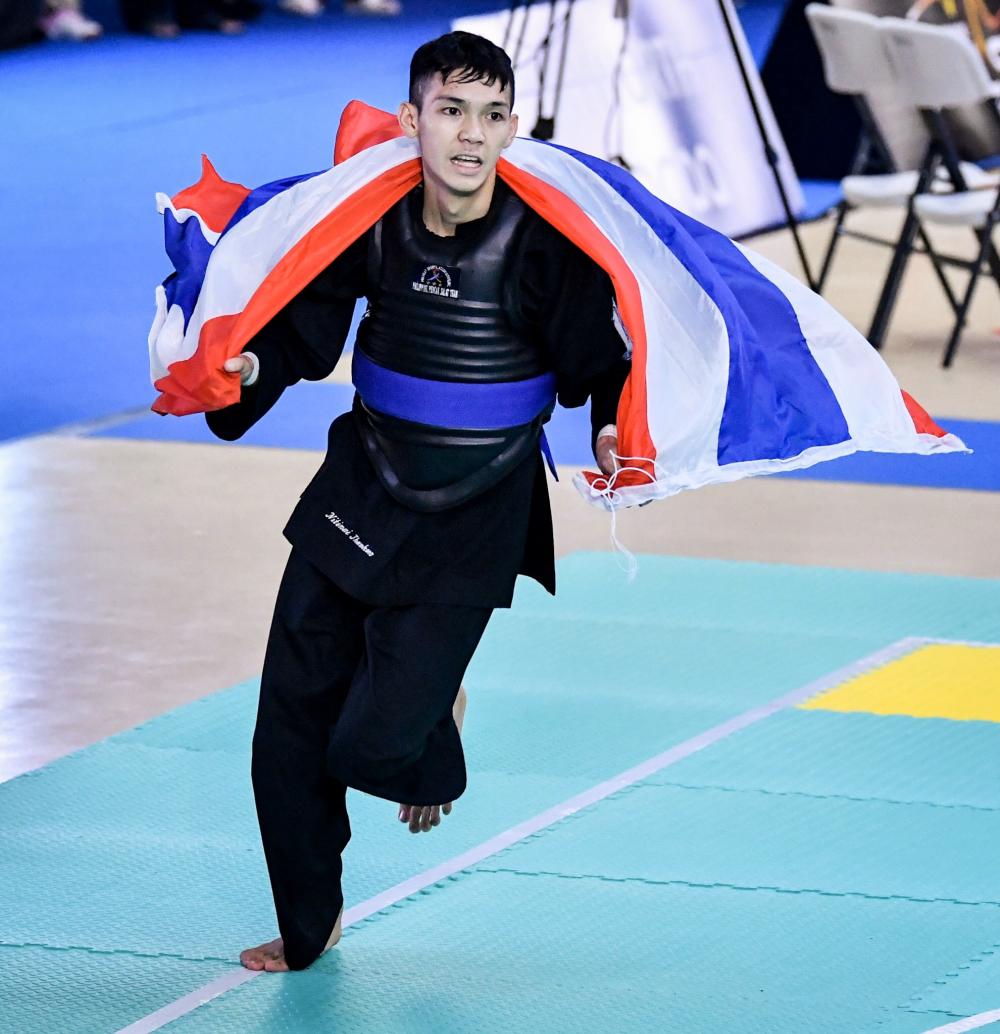 Thai judoka Kachakorn Warasiha lived up to the expectations of her fans and delivered the women's -52kg gold medal yesterday.

The final against Su Khin Khin of Myanmar turned out to be a close affair and it was the vast experience of the 25-year-old Thai that helped her edge her opponent in the title showdown.

Kachakorn claimed a bronze medal at the Asian Open in Hong Kong in 2018 and also took the third place at last year's Asian Games in Indonesia.

Later in the men's -81Kg, Terada Masayuki completed a hat-trick of SEA Games medal when he defended took third straight gold medal in the biennial tournament. 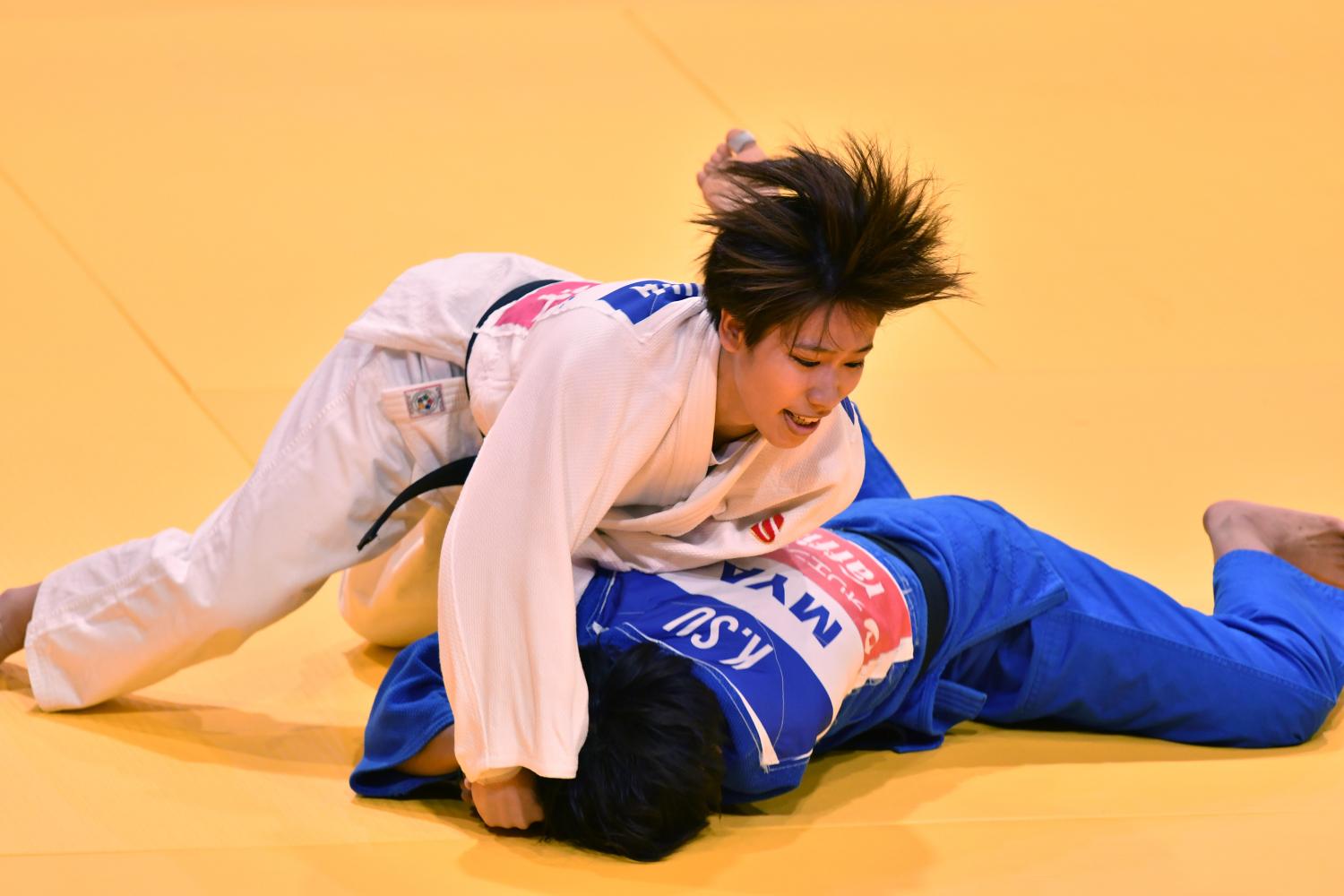 Thailand entered the match on the back of four straight victories but had a troubled start as the duo of Khanittha and Varapatsorn conceded the opening match 15-21, 21-12, 13-15 at Subic Bay.

The Thais quickly regrouped and Tanarattha and Rumpaipruet combined to level the score 1-1 with a 21-18, 6-1 victory. The Indonesians conceded the second after one of their was injured in the second set.

Khanittha and Tanarattha then overcame a stiff resistance from their opponents to take the third match 17-21, 23-21, 20-18 for their fifth win of the tournament to seal the top spot in the league. 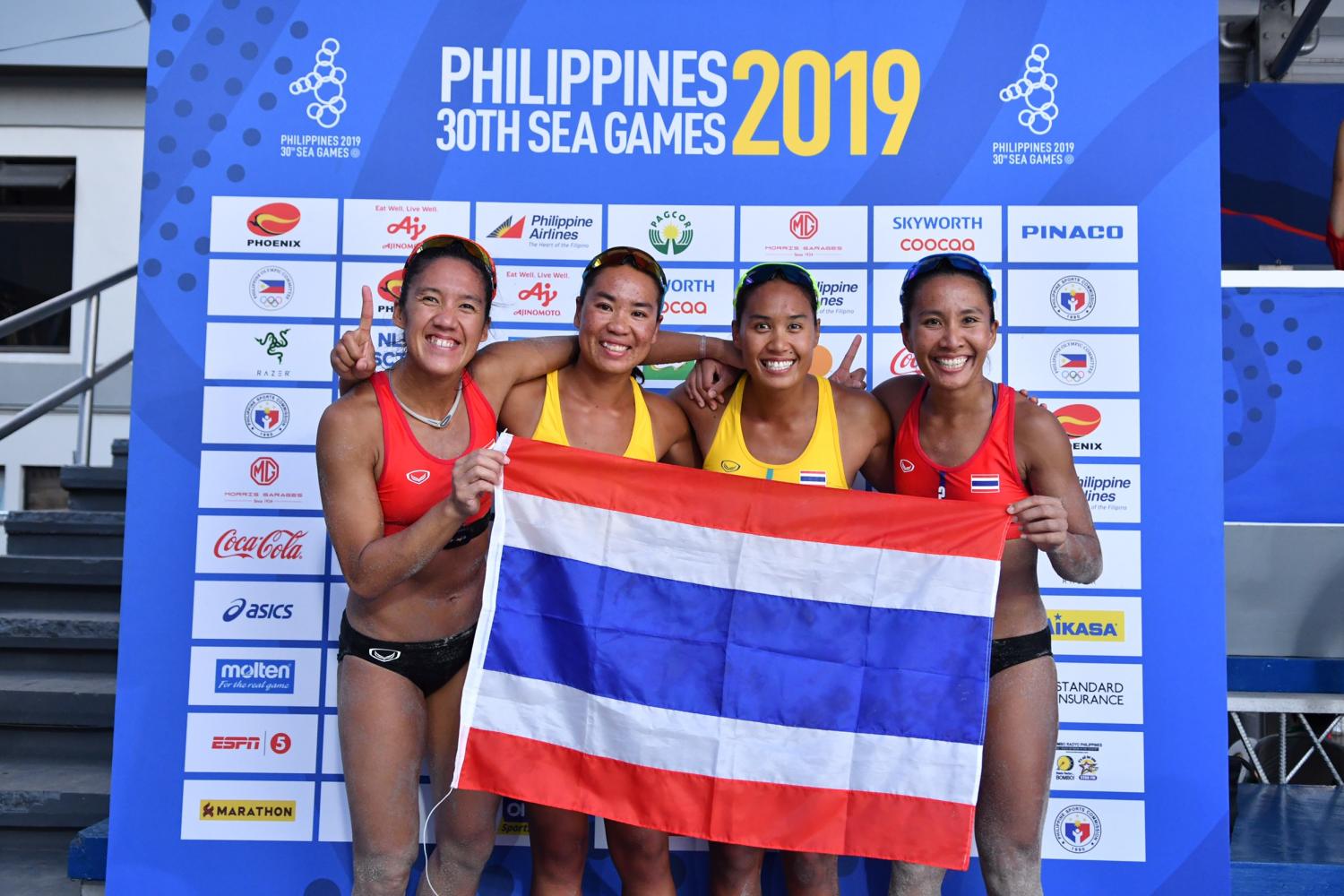 Atichai Phoemsap followed Ammarit into the semi-finals after outpointing Libertus Gha of Indonesia on all five ringside judges' cards in the men's 64kg last-eight round yesterday.

Khunatip Pidnuch started his campaign for the men's 60kg gold with a referee-stop-contest victory over Viset Sam of Cambodia in the quarter-finals.

Anavat Thangrakthok was not in action in the men's 81kg class quarter-finals yesterday after receiving a bye to semi-finals.

Under the tournament rules, all those reaching the last-four are assured of bronze medals.

The host team put up a brave fight, especially in the third set in front of a full house crowd at Philsports Arena.

The Thai women's football team will battle it out against defending champions Vietnam in the gold medal match on Sunday.

The team booked their berth in the title game after beating Myanmar 1-0 in the semi-final clash at Raizal Memorial Stadium in Manila last night.

Myanmar and the host team will play for the bronze medal on the same day. 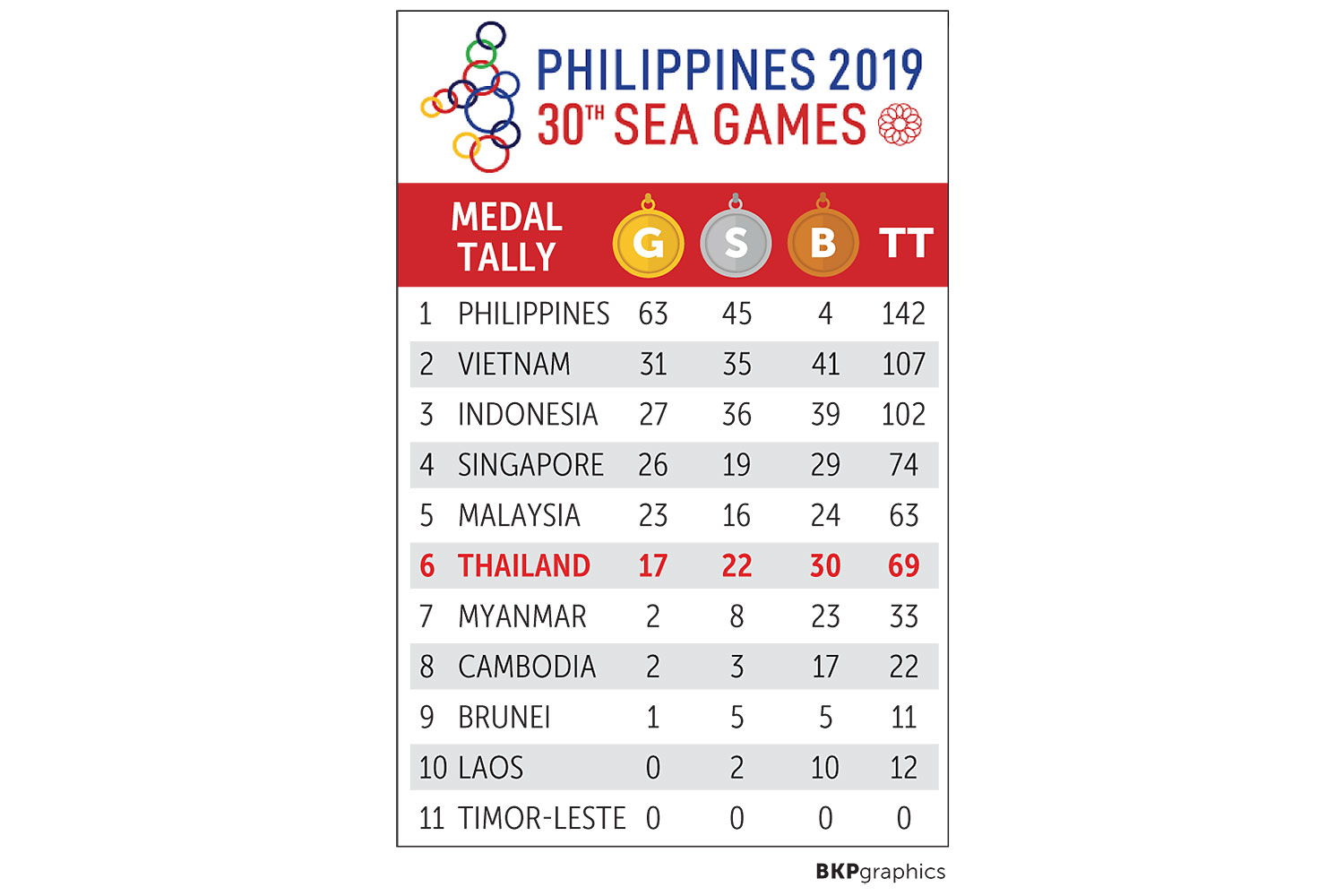