Members of the Thai women's volleyball team celebrate their triumph at the SEA Games in the Philippines on Monday.

Thailand took a massive leap on Monday, scooping a host of gold medals at the 30th SEA Games in the Philippines.

At press time on Monday night, Thailand were second overall with 84 gold medals ahead of third-ranked Vietnam (79).

With two days to go, the Philippines are running away with the overall title having won 136 gold medals.

Thailand aim to take home 121 golds but now will be happy to break the 100-title mark.

In Monday's action, Thailand were successful in taekwondo, athletics, boxing, women's volleyball and eSports among other disciplines. 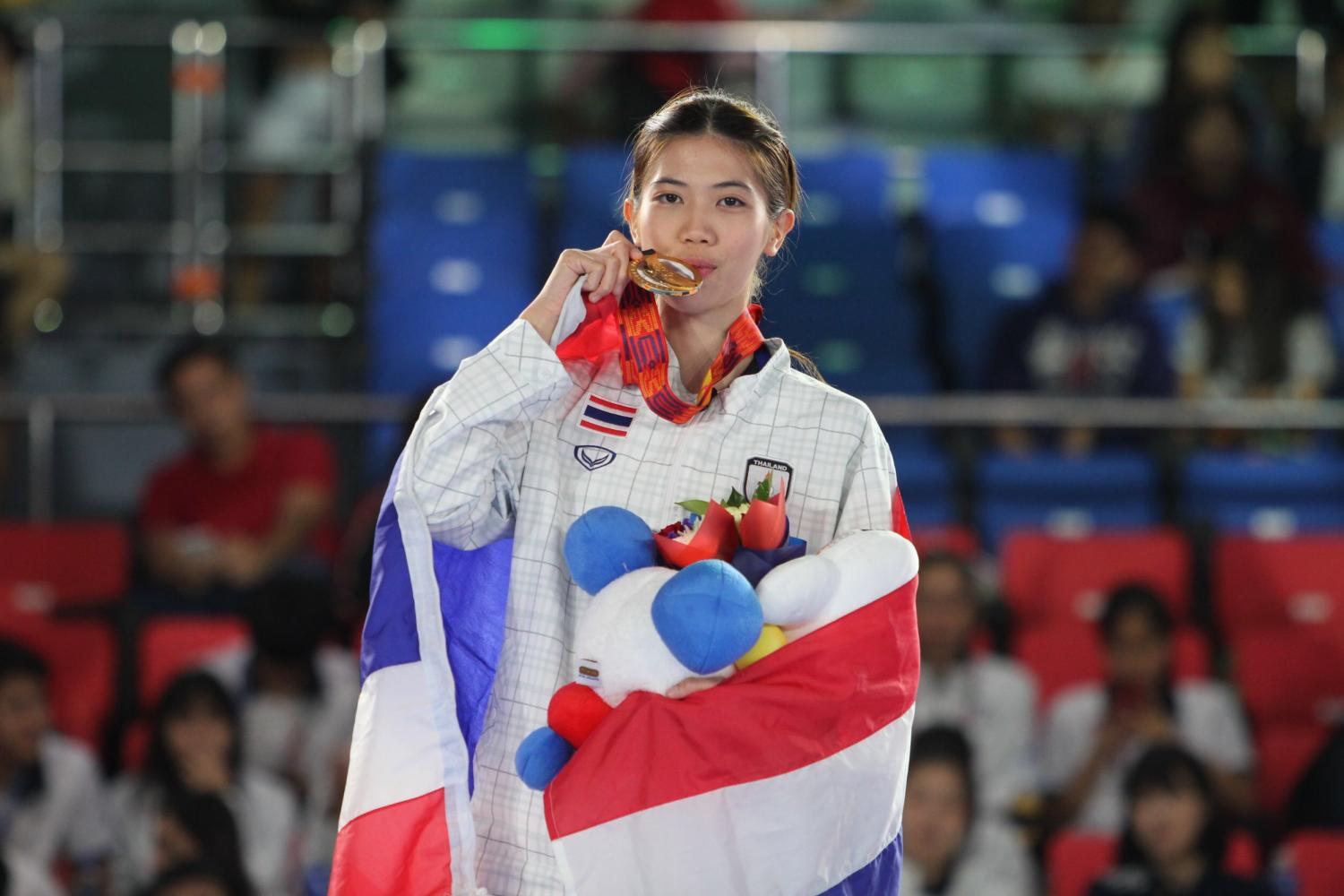 It was also a sad day for Panipak whose grandmother passed away before she competed in the semi-finals.

The Surat Thani native, who claimed bronze at the 2016 Olympics, is now looking forward to winning gold at the 2020 Tokyo Olympics.

The Thai sprinters swept both gold medals in the men's and women's 4x100m relay events.

Kieran Tuntivate claimed his second gold medal with a win in the men's 5,000m.

Relatively unknown in Thailand before the tournament, Kieran is one of the most successful Thai athletes at Philippines 2019, having already won the 10,000m title.

Subenrat Insaeng was the women's discus throw winner and Wanida Boonwan was crowned champion in the women's high jump.

With seven fighters in the finals, only Ammarit Yaodam (men's 52kg) and Khunatip Pidnuch (men's 60kg) lost in their gold medal matches.

However, the Philippines did better with seven gold medals.

The Thai women's volleyball team were again in a class of their own.

The Thai spikers will next play at Asia's Olympic qualifying round in Nakhon Ratchasima from Jan 7-12.

With only one ticket up for grabs, Thailand are favourites to win the tournament and book a ticket to the 2020 Tokyo Games.

Cyclist Komet Sukprasert won the men's BMX time trial in 32.038sec, ahead of Indonesia's Toni Syarifudin (32.560) and Sittichok Kaewsrikhao (32.601), the other Thai in the event.

"It's great to win a gold medal in my SEA Games debut. This is a New Year gift for the Thai and Suphan Buri people," Suphan Buri native Komet said.

Thailand have won five gold medals in cycling and are crowned overall champions of the sport with one event remaining.

eSports is making its SEA Games debut and Thailand took the mixed title for battle game Arena of Valor after beating Indonesia 3-0 in the final at Manila's San Juan Arena.

Malaysia won the first ever gold with a 3-1 win over Thailand in the final of in the mixed Hearthstone -- a popular online card game.

In the Dota 2 mixed final, Thailand were playing the Philippines on Monday night. 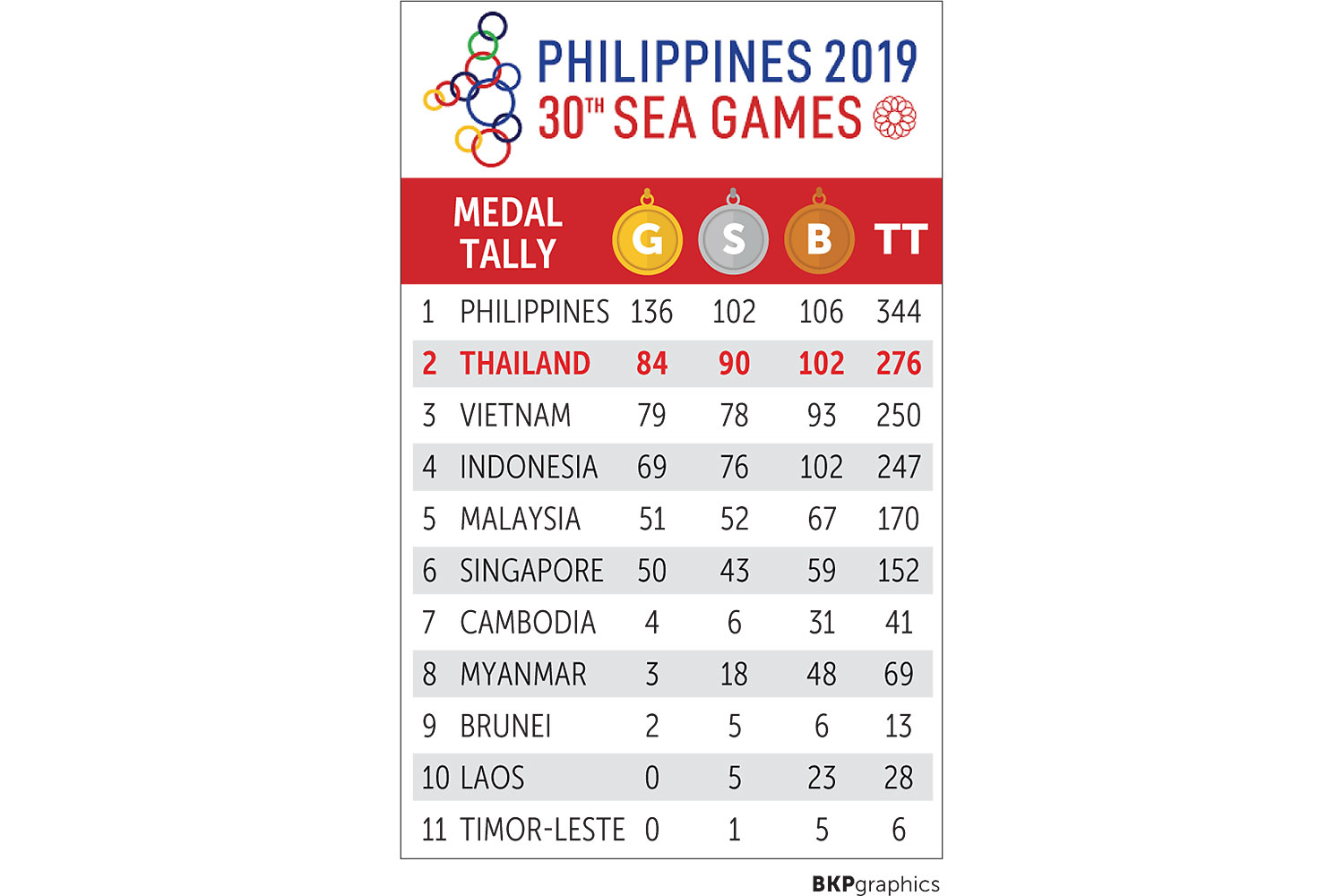 All Blacks squad hit by Covid ahead of first Ireland Test

Fallen Laem to fight on despite loss

Srisaket vows to wrest back title