Yearender: It was a miserable season interspersed with some brief moments of joy as nothing much went right for the national men's and women's teams in 2019

Thailand coach Akira Nishino and his players gesture to fans after a World Cup qualifier in Bangkok.

It was a disappointing year for Thai football in both the men's and women's competitions.

The senior men's team had less-than-impressive results while the U23 side failed to progress past the first round at the SEA Games.

The Thai women suffered three heavy losses at the World Cup and also could not reclaim the SEA Games title.

The national sides of both genders have new coaches who still have a lot to prove.

The men's team had an embarrassing start to the AFC Asian Cup in the United Arab Emirates in January.

Following their 4-1 loss to India, Thailand coach Milovan Rajevac was sacked and replaced by caretaker coach Sirisak Yodyardthai who helped steady the ship.

Under Sirisak, the War Elephants sealed a 1-0 win over Bahrain and a 1-1 draw with the UAE before losing 2-1 to China in the last 16 round.

Sirisak quit after Thailand finished last in the King's Cup on home soil in June.

In came Japanese coach Akira Nishino, who took his country to the last 16 round at the 2018 World Cup.

Nishino was assigned to take charge of both Thailand's senior and U23 sides.

He is a big fan of Japanese football and close to bosses of the country's governing body of the sport.

"Asian football now has a very high standard and the competition is tougher, but I have experience in coaching some J-League clubs and the Japanese national teams," Nishino said after being unveiled as coach of Thailand in July.

"I have never worked abroad, so this job presents a new challenge to me and I know it won't be easy at all.

"I will try my best to help the Thai national team become strong enough to be able to fight against some of the top Asian sides, including Japan."

Nishino, 64, should have learned by now that the job is not easy indeed and it would be extremely difficult to take the War Elephants to a higher level.

His first task was Asia's second qualifying round for the 2022 World Cup.

Thailand are in Group G with the UAE, Vietnam, Indonesia and Malaysia.

Thailand had two scoreless draws with Vietnam, a 2-1 home win against the UAE, a 3-0 victory at Indonesia and a 2-1 loss in Kuala Lumpur.

After five games, Vietnam lead the group with 11 points. Malaysia have nine points, ahead of Thailand (eight), the UAE (six), who have a game in hand, and Indonesia (zero).

Thailand's remaining games are at home to Indonesia and Malaysia and away in the UAE.

On the bright side, some new faces impressed in the World qualifiers, particularly Ekanit Panya, who scored a goal and set up the other in the team's win over the UAE.

At the SEA Games in the Philippines, three-time defending champions Thailand were favourites to win their fourth straight title in the U23 tournament.

Teams were allowed to have two overage players but Nishino did not pick one.

However, he still had some players who have already played for the senior team, including forwards Supachok Sarachat, Supachai Chaided and Suphanat Mueanta.

The Thais lost 2-0 to Indonesia in their opening match and needed to beat Vietnam by at least two goals to advance to the semi-finals in their last group game.

Against Vietnam, Thailand were fast off the blocks and got what they needed, scoring two goals in the opening minutes.

But once the Vietnamese found their rhythm, they hit back with two unanswered goals to eliminate Thailand and went on to win the title.

The Thais next play at the Jan 8-26 AFC U23 Championship on home soil.

Thailand are in Group A along with Bahrain, Australia and Iraq.

The event also serves as Asia's qualifying round for the 2020 Tokyo Olympics with the top three teams earning tickets to the Games.

The Thai women's team made their second consecutive World Cup appearance at France 2019.

At Canada 2015, Thailand lost to powerhouses Germany and Norway and beat Ivory Coast.

In France, they were grouped with the USA, Sweden and Chile.

It turned out to be a nightmare for the Chaba Kaew who set some unwanted records.

They opened their campaign with a record 13-0 defeat to the defending champions Americans.

"The Americans are very strong. They are excellent all-rounders. My players are really disappointed because the score isn't what they expected," said Thailand coach Nuengrutai Srathongvian.

The Thais then lost 5-1 to Sweden with Kanjana Sung-Ngoen scoring the country's only goal of France 2019.

"This one goal made us laugh, made us smile and made us happy," said Kanjana.

Thailand completed their campaign with a 2-0 loss to Chile.

In all, they conceded 20 goals -- also a record for one Women's World Cup.

However, under the new management, the Chaba Kaew lost 1-0 to Vietnam after extra time in the AFF Women's Championship in Chon Buri.

The Thais also were defeated 1-0 by Vietnam after extra time in the SEA Games final.

Their next mission is Asia's qualifying round for the 2020 Olympics to be held in China from Feb 3-9.

Thailand are in Group B with Australia, China and Taiwan in the two-group tournament. The top two teams get tickets to Tokyo 2020.

On the domestic front, Chiang Rai United won their first ever Thai League 1 crown on the last day of the season.

In the last round of matches, Buriram United only needed a win at already relegated Chiangmai FC to retain the title.

While Chiang Rai were cruising to an easy win at Suphanburi, the result would be meaningless as Buriram were winning 1-0.

But with a few minutes left, Chiangmai scored an equaliser which handed Chiang Rai the title.

Both Chiang Rai and Buriram had 58 points but the Beetles had better head-to-head results against the Thunder Castle.

Buriram ended the season without any silverware as they also lost to PT Prachuap in the League Cup final.

Brazilian Ailton Silva resigned as coach of Chiang Rai United after the achievement and has been replaced by Japanese Taki Masami.

Suphanburi were probably the luckiest team of the season as they avoided the drop thanks to unusual circumstances.

They finished third from last in Thai League 1 but will remain in the top flight after PTT Rayong, who were 11th, suspended the club.

The Football Association of Thailand then confirmed that the decision by PTT Royong meant only two teams -- Chainat and Chiangmai -- would be relegated to the second tier.

Port, who finished third in the league, lifted their first trophy in 10 years when they won the FA Cup after beating Ratchaburi 1-0 in the final.

Player of the year

Yokohama clinched their first J1 crown in 15 years after beating title rivals FC Tokyo 3-0 despite finishing the match with 10 men on the final day of the season.

Second-ranked FC Tokyo came into the last round of matches needing victory by four goals or more for their maiden J1 title.

But first-half goals to Thailand international Theerathon, who was on loan from Thai club Muang Thong United, and Erik ensured the match would serve as a victory party for the jubilant home fans at a packed Nissan Stadium.

"I am glad to have come this far," said the 29-year-old defender.

The Nonthaburi-born star was later named the FAT's player of the year. 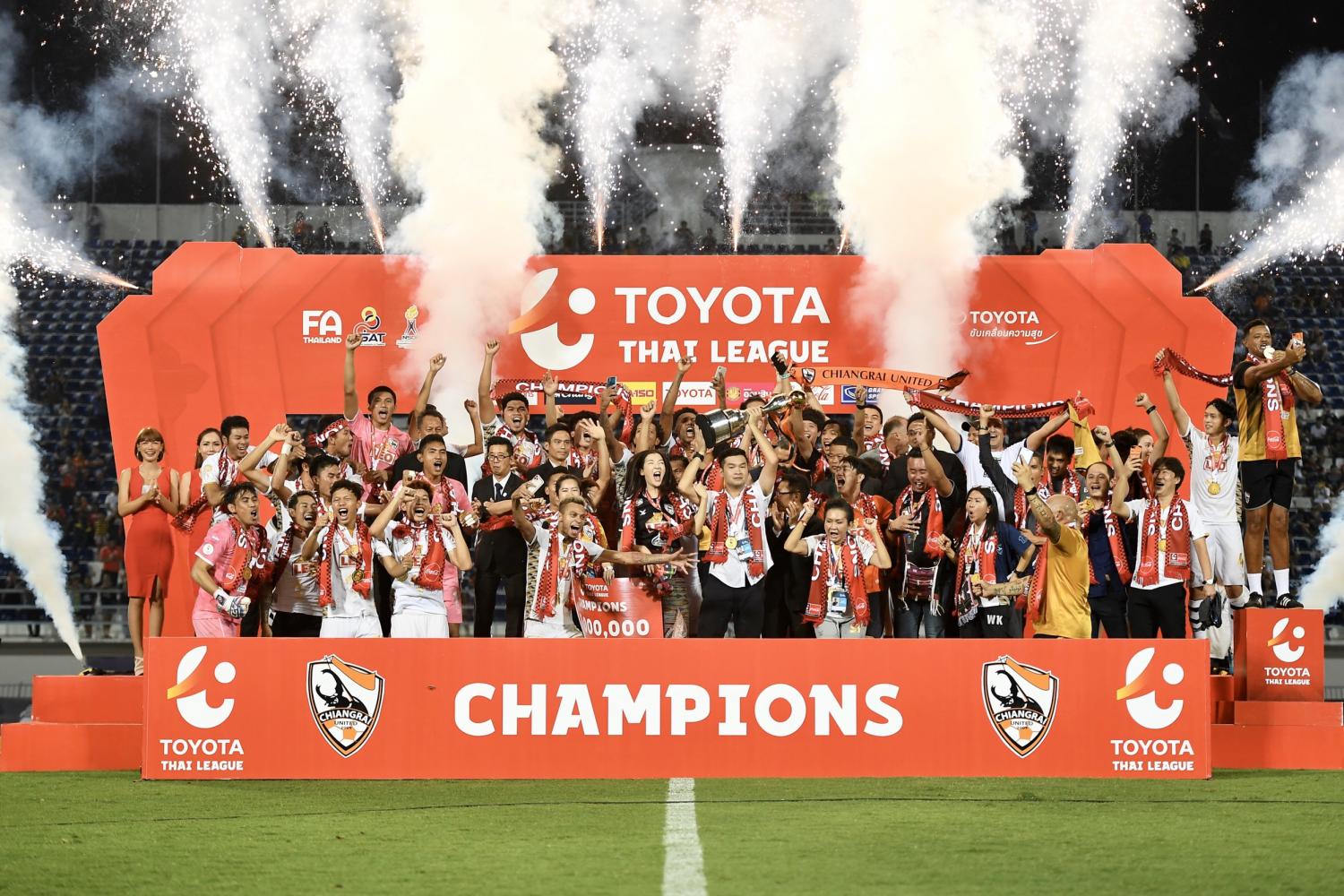 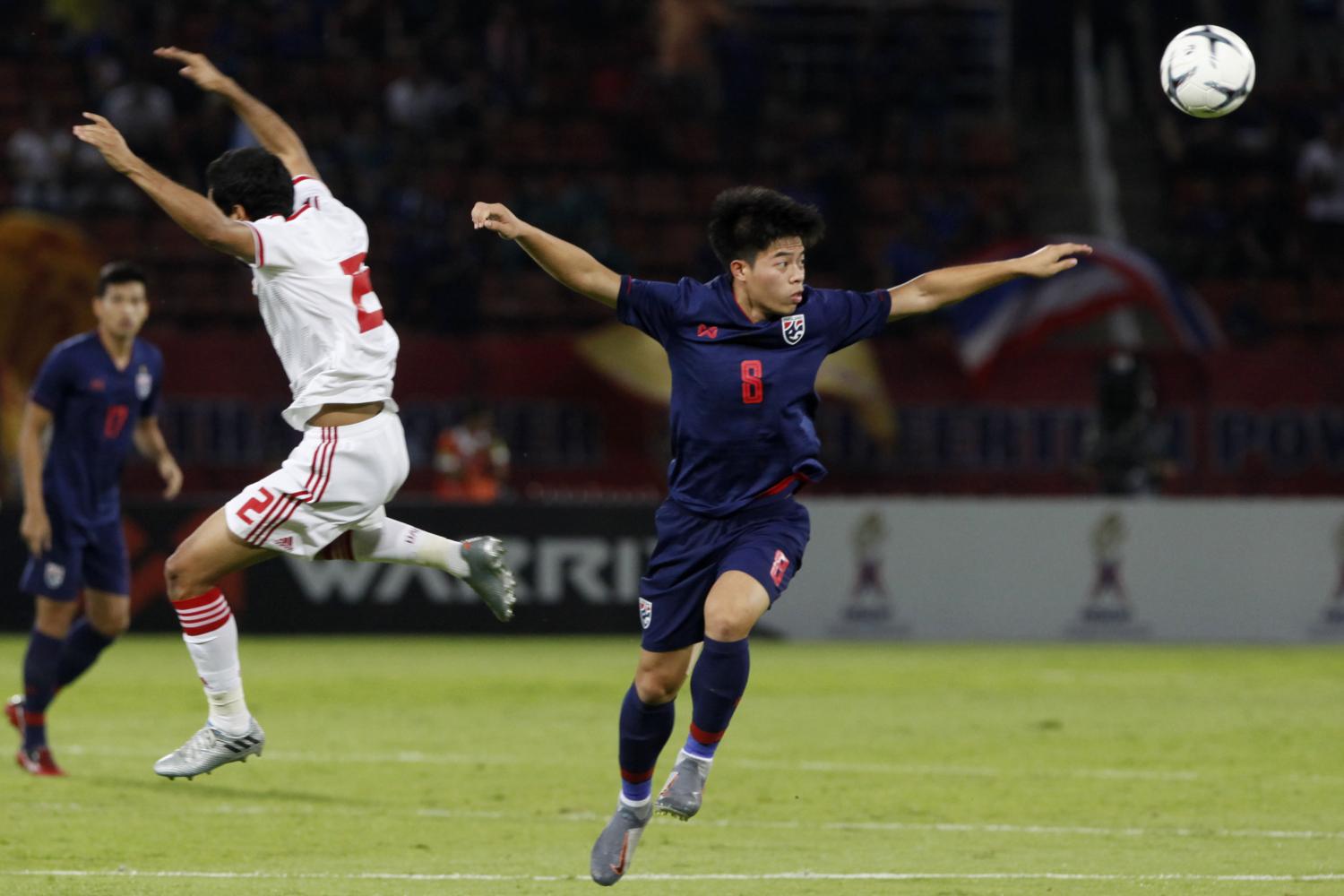 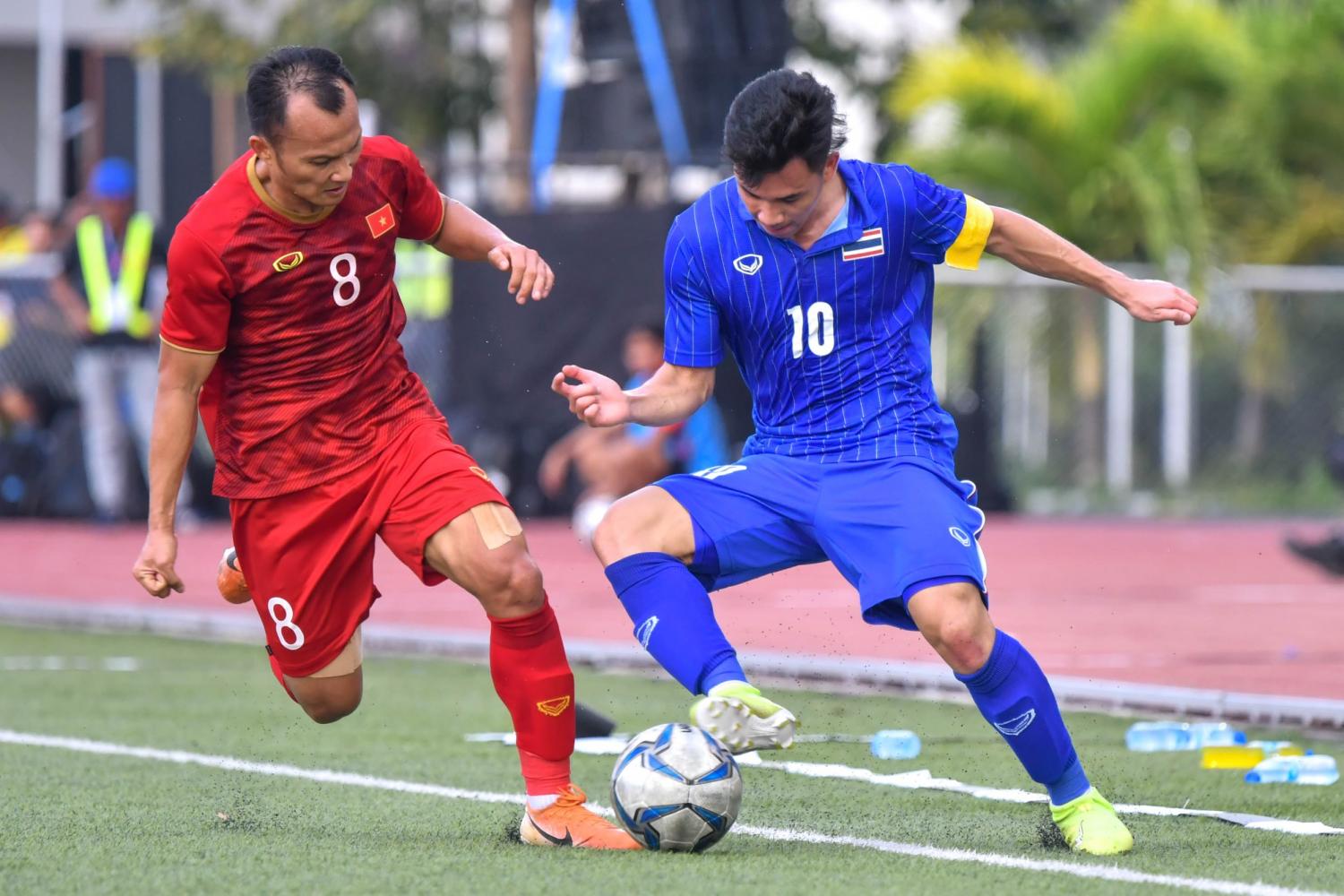 Thailand's Supachok Sarachat, right, in action against Vietnam at the SEA Games. PR 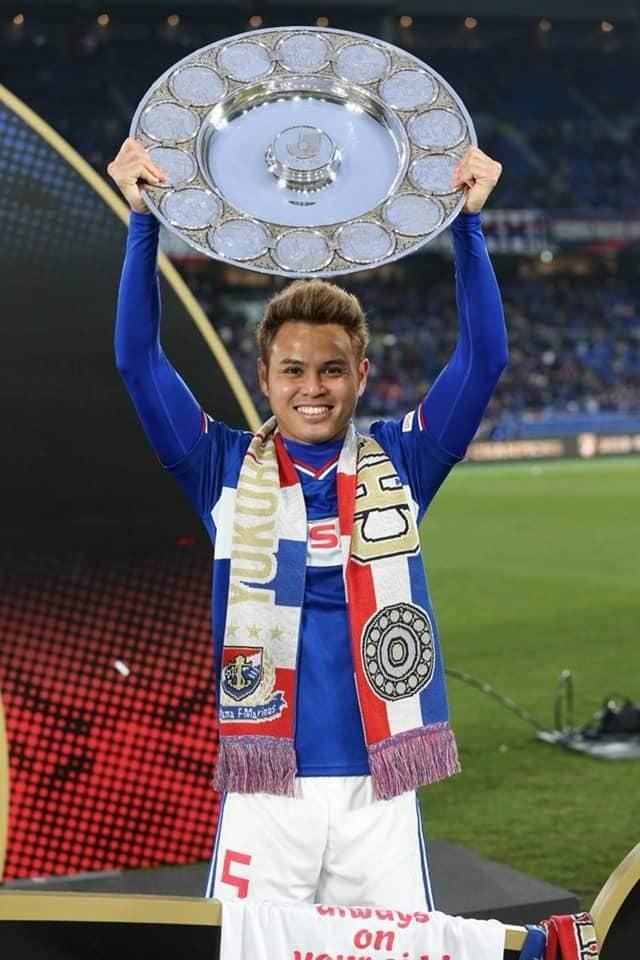